In planning our year of travel, we were aware that while we would see so much, there was a lot that we would actually be missing, too. One of those things is our family. Before leaving, we’re trying to visit everyone – to spend some quality family time before we miss them for a year. Our first stop? My sister, Rachel, and her daughter in Pittsburgh.

We flew down on a Thursday evening with a plan to work from her place a bit on Friday and then spend the weekend bonding. When we arrived, we went directly to Primanti Bros for a quick meal with Rachel and our niece. After living in NYC for so long, you get used to ridiculous beer prices, so when you can find a half price happy hour, you get two. And if they have a meat sandwich stuffed with french fries, you get that, too. While there, Rachel mentioned, “by the way, I don’t have internet or cable”. My first reaction was that it was insane. My second reaction was that being a bit cut off might actually be really smart, and something that we should plan on for the next year. That aside, we still had a little work to do. Luckily, her boyfriend had internet, so we planned to go over to his place the next day to work. Thursday night, I tethered my phone to get a couple emails out. Looking over my shoulder for a few minutes, my 9-year-old niece finally said “You just email people all day? I could do that!” She’s figured me out. Before going to bed, they gave me a stuffed hippo that Rachel had crocheted. “Henry” will travel will us from country to country so we can send pics back to the family.

On Friday, after emailing people all day, we headed to the Pittsburgh Convention center where there was a Beer Fest going on. We were handed a 5-ounce glass and given free rein of more than 100 breweries giving out pours. After about 3 hours we had our fill and decided to move on. While I could have easily gone to bed, the world had other plans, and we went to a great grappa bar for another drink or two. Does that top off the night? Of course not! We then wandered to a bar down the street and had a couple more beers, plus some great whiskey that they infuse with smoke right in front of you! With that, we were thankfully allowed to go back to sleep. 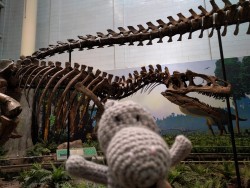 Saturday was a family day and the niece was in charge. She chose the Carnegie Museum of Natural History. Once there, she knew exactly where to go and in what order – a child after our own hearts! We took a couple pics with Henry and then went to a German Beer hall for lunch. Then it was nap time for us all before hitting the town for dinner and drinks. We ended up at the amazing Pig Iron Public House, where we got salads (much needed after a German lunch) and a few beers. After that, we headed out for a nightcap before heading to bed.

A nice and filling breakfast on Sunday was in order before heading to the Airport to return home. It was wonderful to spend so much quality time with my sister, her boyfriend, and our niece. And it was incredibly great to see how Rachel has become such a wonderful mother (and a pretty great beer expert, too).