On March 26, 2016, we had the privilege to witness something truly unique: the traditional Chinese wedding of two of our closest friends. In advance of the large public reception that evening, we were even privy to the preparation of the bridal party beforehand, and it was really something amazing.

We landed in Shanghai on Friday March 25, looking for Juliana, the mother of the groom and someone whom we’ve known for quite a few years, to lead us to a bus from the airport to the suburb of Haining. Her son, Zac, worked with Charley for two years at the World Scholar’s Cup, and is an amazing man I’ve known since the end of his high school days, when I met him and two of his classmates as his high school team prepared for the United States Academic Decathlon finals in 2006. Over the course of his time in the World Scholar’s Cup in 2012-2014 and working with Grace Yang, the two fell in love, and the rest is history. Fast forward to 2016 and the wedding of Zac Ellzvgyon and Grace Yang (楊筱), and you have one of the greatest spectacles I’ve witnessed. After setting their wedding date, the two took the unprecedentedly generous step of offering to cover the accommodations and entertainment costs of any of their U.S. friends who were able to take the flight (and time) to join in their happiness. (After leaving the World Scholar’s Cup, Grace finished her degree at New York University, and there in New York City made a large number of really close friends they were eager to have join them.)

After adrenaline took care of our jetlag, we woke up on the morning of March 26 eager to see what was in store. The preparation for a traditional Chinese wedding has a lot of fun customs that the bridal party normally reserves for a small intimate group the morning of the wedding. Knowing that about thirty of their closest friends had flown across the world, they allowed us to witness all the fun that was in store. Zac arrived at Grace’s house, setting foot outside the car at precisely 9:38 (naturally, because 8 is quite the lucky number in Chinese culture). He and his groomsmen were met by the bridesmaids (but not the bride!), who demanded that they be impressed by him before they could allow him the privilege of reaching his bride. There were race relays… word games… a dance off… pushups… and of course, if he failed or needed a task to be a little easier, he could always bribe them! (Bribes only occur in the form of cash stuffed into red envelopes, the only gift form for cash in China.)

A number of formal customs followed, for which Charley and I mostly showed ourselves outside and allowed the families some privacy, as they symbolically became one family. This included a tea drinking ceremony, as well as the drinking of a fertility soup for the new couple. 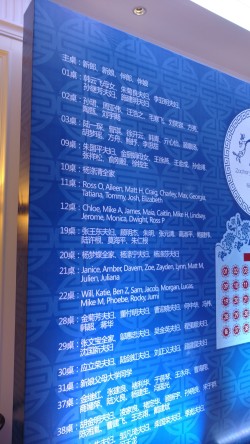 Even the seating assignments for the reception gave a hint to how varied the guests were. 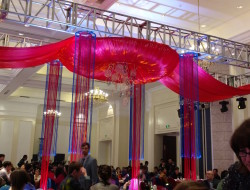 The most beautiful chuppa I’ve seen in my life.

The wedding reception itself was something to behold: it was an incredible blend of Chinese and western customs, including Jewish ones. There were performance artists, stage games, lottery giveaways, and so much food we ate until bursting.

This wedding trip to China has been one of the highlights of my life, and I’m so ecstatic that our round-the-world Draft Itinerary hasn’t even started yet. There’s a wide world out there, and I (still) can’t wait to see it all.