Ireland and its Landmarks

Ireland and its Landmarks

There are hundreds and hundreds of castles in Ireland – many more than a thousand years old. On top of that, there are at least as many churches, barns, and towers.

As Craig and I picked up the rental car, we drove directly to Newgrange and Knowth. En route, we saw a sign on the highway directing us to an exit to see a castle. With our focus on Newgrange and Knowth, we made a mental note to think about visiting it on the return trip. Soon afterwards, we passed another sign. Then another. It turns out that basically every town in Ireland has its claim to fame in the form of a castle, with a long and detailed history.

As the days progressed and we traveled from city to city, we continued to see the signs, sometimes stopping, and sometimes passing by, barely noticing another 1500 years of history on the side of the highway. At times, it was honestly hard to keep the interest up for every monument we passed – like Clark Griswold passing by Parliament one too many times.

Some of the signs point to gorgeously maintained castles with unsurprisingly high entrance fees, while other locations were simple ruins that you visit by parking along the side of the road and hiking up a trail to wander through for free. For reasons both financial and not, we visited more of the latter. 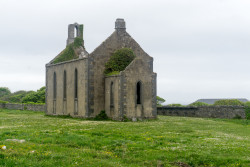 An old church on Inis Mor

On Inis Mor, the view from our bed & breakfast was of a ~1500 year old cemetery, with the remains of the dwelling of Saint Enda of Aran. As we walked and biked around the island, we came across multiple pre-historic forts with nothing keeping us from climbing on them other than a small sign and a sense of reverence. We also passed a church being devoured by weather and flora.

Each Landmark has a unique and long history – much longer than modern Ireland itself (last month was only the 100th anniversary of Ireland’s independence from British Rule). The Rock of Dunamase was purposefully destroyed in the 1600s to prevent its future use. Newgrange and Knowth were used and reused by many different groups of people during the span of 3000 years, each group adding or modifying its structure and use.

Ireland’s Office of Public Works has a Heritage Services division which cares for 780 sites in various states of repair across the country. Non-profits like the Irish Landmark Trust are doing work to repair and preserve properties across Ireland. Other castles, like Blarney, have been controlled by families for hundreds of years.

When passing though a well-preserved castle, you are taken back in time – able to nearly stand in the footsteps of its previous inhabitants. It pulls you in a clear and specific way. But there’s beauty in seeing history through the history of a relic that is returning to nature – one that is being pushed down by weather and pulled down by flora. Being able to walk through these places gives me a closer connection to both the structure and to the long history of a country with so much to tell. It reminds me that a week in the country wasn’t nearly long enough time to absorb a few thousands of years of history. It reminds me that I need to come back.

(For more pictures from Ireland, visit the In Pictures post.)