NOTE: These are Charley’s thoughts on the massacre in Orlando. For Craig’s, visit here.

The Tangier of the 1940s and ’50s was one that attracted queer life from around the globe, existing largely because of the 1923 Tangier protocol and lasting until Tangier was absorbed into Morocco in 1956.

During that time, the city was ruled by international law in writing but by almost no law in practice. As a result, queer folk flocked to the area to live freely. Many of those that came were writers and artists. Paul Bowles moved there in 1947 and lived until his death in 1999. William Bouroughs wrote Naked Lunch at El Muniria, a hostel at which he stayed at times with Allen Ginsberg. Bowles was also a semi-regular along with other vistors and residents including Gore Vidal, Tennessee Williams and the painter Francis Bacon. 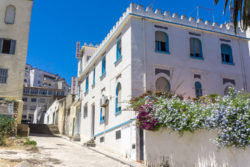 Living freely was easy. In one letter to Ginsberg, Burroughs writes:

“This town seems to have several dimensions. I have experienced a series of Kafkian incidents that would certainly have sent Carl back to the nut house. I go to bed with an Arab in European clothes. Several days later… I meet an Arab in native dress, and we repair to a Turkish bath. Now I am almost (but not quite) sure it is the same Arab. In any case I have not seen no.1 again… It’s like I been to bed with 3 Arabs since arrival, but I wonder if it isn’t the same character in different clothes, and every time better behaved, cheaper, more respectful… I really don’t know for sure.”

Becoming part of Morocco in 1956 ceased much of this. The official Islamic religion cleared much of the gay away, and the “Great Scandal”, a series of arrests for sexual and drug-related crimes, left the remaining gay scene all but non-existent.

We’ve been told, though, that it can still be found in corners of cafes and in some hotel bars. As Craig and I started our journey to Tangier, we were eager to see if we could find any residue of the queerness that previously existed.

And then Orlando happened.

As we traveled to Tangier (via a boat from Spain), we learned of the horrible attacks in Florida and felt a loneliness that I’m not sure we have ever felt before. Within a few minutes, we went from eager to see a new continent to wanting to be head back to the states and congregate with our LGBT friends in sorrow and anger.

We were on our way to a country where LGBT rights were abysmal, and where we would be for the next week. We knew, though, that you can always find queerness in the cracks. The feeling of excitement to find someone to talk to turned into a deep desire to just not feel so alone – to fine others to help acknowledge our sadness and let us to the same.

As it turns out, we were also visiting during Ramadan – something that we knew was happening, but didn’t calculate that it would change much of what we wanted to do.

We headed to the Tanger Inn, connected to Hotel Muniria where many of the artists stayed. It was closed for the holiday.

We visited Bar Number-One, where we were told the new literary ex-pats frequented. As we entered, it was empty and dark. The owner was just about to close up but was happy to give us both a round and chat a tiny bit. He said that it was the quietest Ramadan he’s ever experienced. While we were there, not one other person came into the bar for a drink.

We visited Cafe Hafa, known for its gorgeous views. It seemed closed, but someone on the outside was helpful enough to knock on the door loudly and throw some stones over the wall to get attention of those inside, who eventually came to the door. What we saw was beautiful, but still lonely. Though we knew that we were sitting in the same place that Burroughs, Vidal, and others probably sat, it wasn’t much comfort to us without the needed connection to the present for which we were looking.

When we weren’t searching for history or wandering the medina, Craig and I holed ourselves up in our room, unable to do anything but read the news over and over again. We would wake up, turn to our phones, only to be stuck in a circle of pain, sadness, and anger until we would try to snap ourselves out of it by taking a walk, finding a meal, or petting a cat.

While I’m more of a homebody than Craig, and much less willing to dance in public, I still enjoyed the gay bars of New York. It was hard to be in a country where it was so hard to find people who understood our pain, and we set our sites on finding a gay bar as soon as we got to our next location – the Canary Islands. Thankfully, the Spanish islands are very LGBT-friendly. Before getting there, we had lined up multiple places to visit.

In an instant when landing on Tenerife, we knew we were more comfortable than we had been in a week. And, although we hadn’t found the Moroccan queer history that we wanted to, we were glad to have stretched our comfort zone a bit during our time there. Next time, though, we might do it outside of Ramadan.

I’m thankful for the global network that we have now. With global phone plans, email, and Facebook, we feel as close as we possibly could our friends and family in the states without actually being there.

I’m also thankful that, over the next month, Craig and I will be visiting Pride festivals in London, Paris, Köln, and Berlin. We continue to be reminded that our family is a global one, and one that requires participation and activism. At times it’s easy to feel that we’ve come a long way (and we have), but right now I feel like we still have a long way to go. And I’m ready to keep moving.