After witnessing Pride in Cologne and spending an extra couple days there enjoying the city, it became time to meet up with Charley’s mom Jan. Over the course of our trip, we’re hoping to meet as many family members as we can overseas, when they have the time available to come see us, and it was fitting that Jan was able to be our first meetup.

The German DeutscheBahn train system is really extensive and fairly easy to understand, so on July 6, we woke up early and headed from Cologne to Frankfurt airport. Meeting Jan at the airport also had a built-in surprise: our friends Zac and Grace were there as well! They’re taking the time to do a little European travel before trying to start a business in August, and they were able to spend a day in Frankfurt to see us while they were in our neck of the woods. 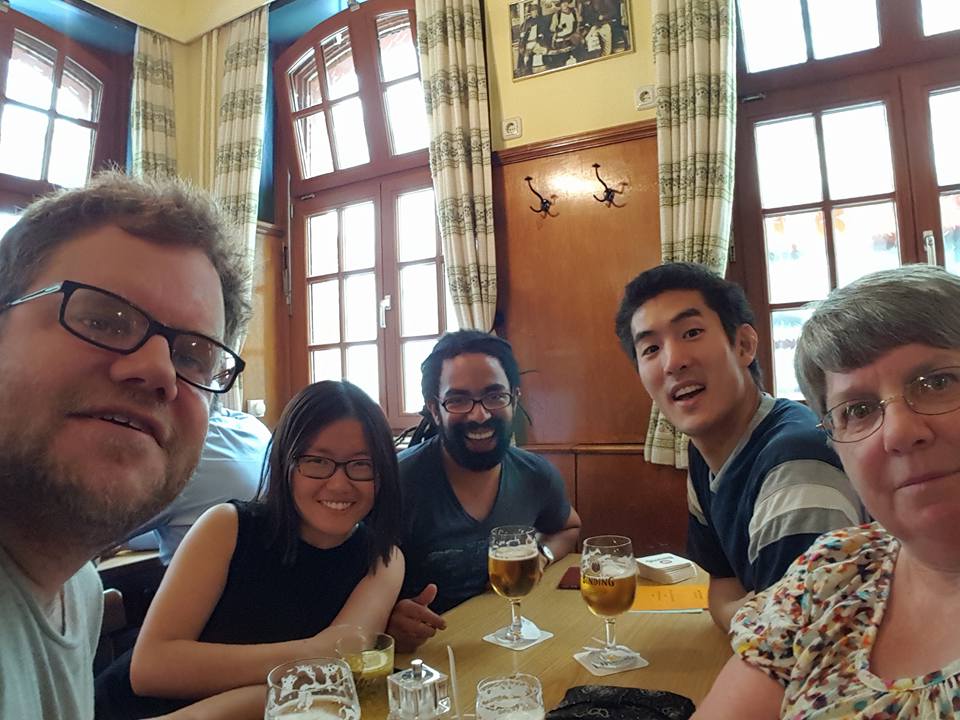 What a treat to have lunch with this crew together!

After lunch, we said our goodbyes and took the train to Erfurt, a fairly small town of around 200,000 people. Jan is a Lutheran pastor, and our plan for the next week was to stay in Erfurt, at a nice home we rented on Airbnb. From there, we had DeutscheBahn train passes and could plan to take day trips to many of the famous sites related to Martin Luther and the Protestant Reformation.

Thursday, July 7, we woke up and headed to Eisenach, bound for Wartburg Castle, the first stop on our pilgrimage to Martin Luther’s famous sites. Most of us know the story of how Martin Luther nailed his 95 Theses to the door of the Catholic Church, starting the Protestant Reformation and revolutionizing the Christian religion as we know it today. After being branded an outlaw, Wartburg Castle became Luther’s hideout, where he diligently continued his work.

Since elementary school, I’ve long known the story of Martin Luther’s Protestant Reformation, but it was here I learned that his contributions to Germany ran much deeper than that. In those days in Germany, there were tons of German dialects, frequently differing from town to town and state to state. Luther spoke several of these dialects fluently; by translating the Bible into a form of German that was understandable to such a wide audience, he began the process of essentially unifying these German dialects into a single common German language.

Friday, July 8, we traveled to Eisleben, Martin Luther’s hometown and the place of both his birth and death. There are distinct “birth house” and “death house” museums that chronicle his life, as well as the Church of St. Peter and St. Paul, where he was baptized as a child. It was a really profound experience to visit the site of something so momentous in western history, and if I’m not mistaken, I may have noticed Jan getting choked up as she felt the full brunt of the history from the place.

The weekend (Saturday July 9 and Sunday July 10) were more laid back affairs, as we stayed around Erfurt to see what our local “crash pad” had to offer. Erfurt has its own noteworthy historical sites, and we enjoyed our expedition to see the St. Mary’s Cathedral and St. Severi Church, as well as the view from the top of the Augustinian Monastery. There were some hidden gems as well, such as the Mill Museum that contained three floors of still functional watermill equipment.

The most historically significant site of the week was likely Monday July 11‘s trip to Wittenberg. The Castle Church in Wittenberg is famous as the site at which Martin Luther attached his theses to the door of the Catholic Church. The famous door itself was lost in a fire in the late 18th’s century, but a bronze memorial has been erected on the side of the church now. (Interestingly, we heard during our prior tour of Wartburg Castle that the famous incident itself may have been more legend than fact.)

On July 12, our final trip of the week was a quick hop to Leipzig, where we visited the St. Thomas Church, where the famous J.S. Bach was organist and choirmaster. One interesting side note: a trio of street performers outside the church here were the first time I’ve seen a woodwind ensemble playing as street performers. It was really great to hear some classical music on woodwind while we were touring the church and nearby area.

July 13 was, sadly, the end of this week with family. We headed to Frankfurt Airport bright and early, bound for separate flights. Jan headed off for her flight back home to Pennsylvania, while Charley and I camped out comfortably in the lounge and waited for our afternoon flight to Sofia, Bulgaria. We’ll have more on that later.