The day after Charley’s birthday, on Thursday, October 27, we headed to Taipei, Taiwan. I’ve visited China several times before, but this was my first time to Taiwan, officially the “Republic of China.” (This often confuses people; note that China is formally the “People’s Republic of China.”)

We actually took a lot of videos while we were in Taipei, and hopefully we can edit them later into a nice vlog, but in the meantime, take a look at some of the pictures and video we got while touristing the night markets and going to the Taipei 101 tower, the world’s tallest building from 2004 to 2009: 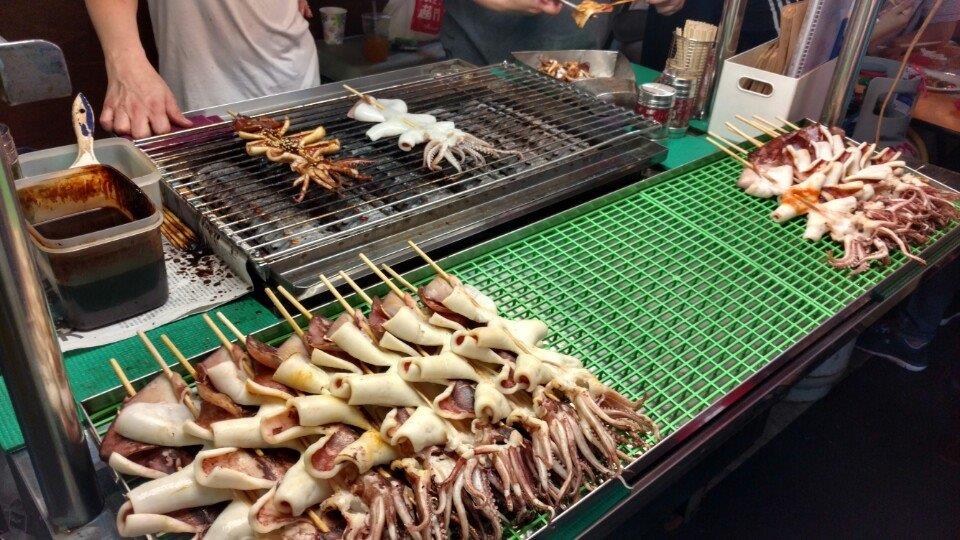 It’s a good thing I love calamari! These stands were everywhere! 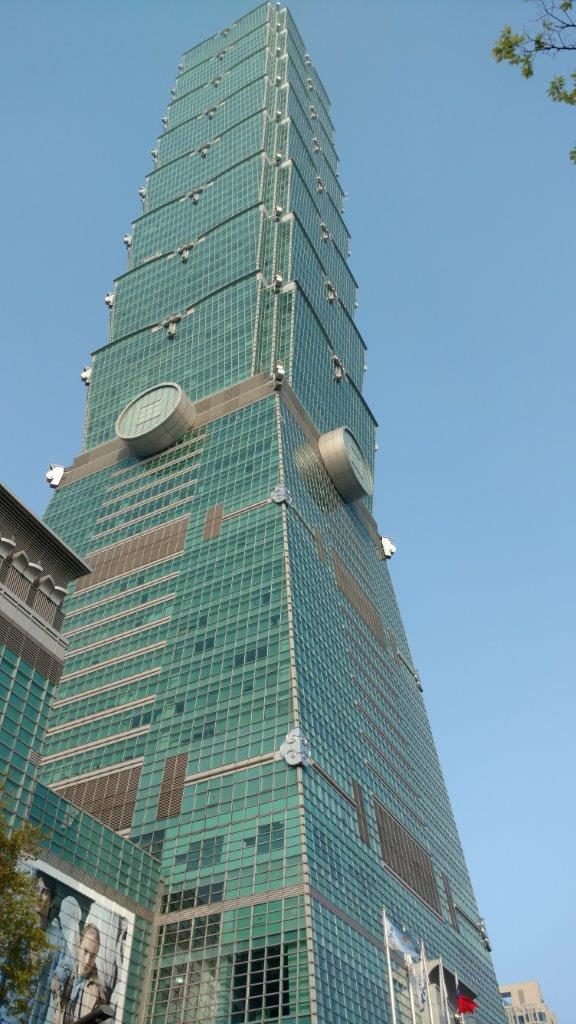 Taipei 101 is SO tall it boggles the mind, but also importantly has a delicious and affordable food court! 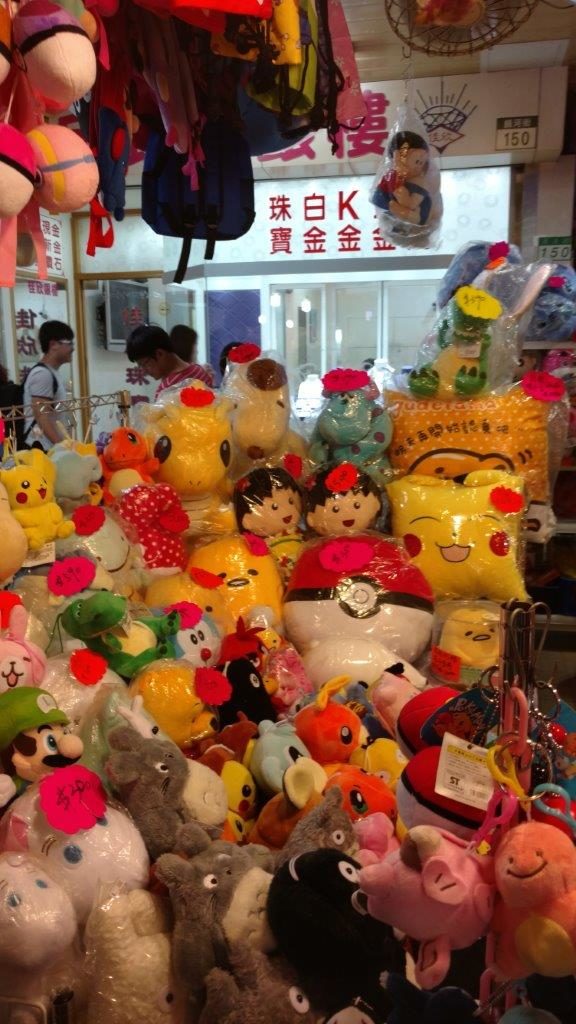 They absolutely ADORE Pokemon in Taiwan. Check out this store’s pillows!

The overall feeling of Taiwan is really great. While it is Mandarin-speaking like mainland China, its style and culture feel very western, and our trip was of course timed to see and participate in LGBT Pride, the largest in all of Asia. (As always, be sure to take a look at Charley’s pictures from the day if you haven’t already.) Because it’s the most elaborate Pride celebration in Asia, people from all over Asia tend to converge on Taipei for the event. Over the day, we met folks from Thailand, Malaysia, and Singapore who had all come to Taipei to celebrate. 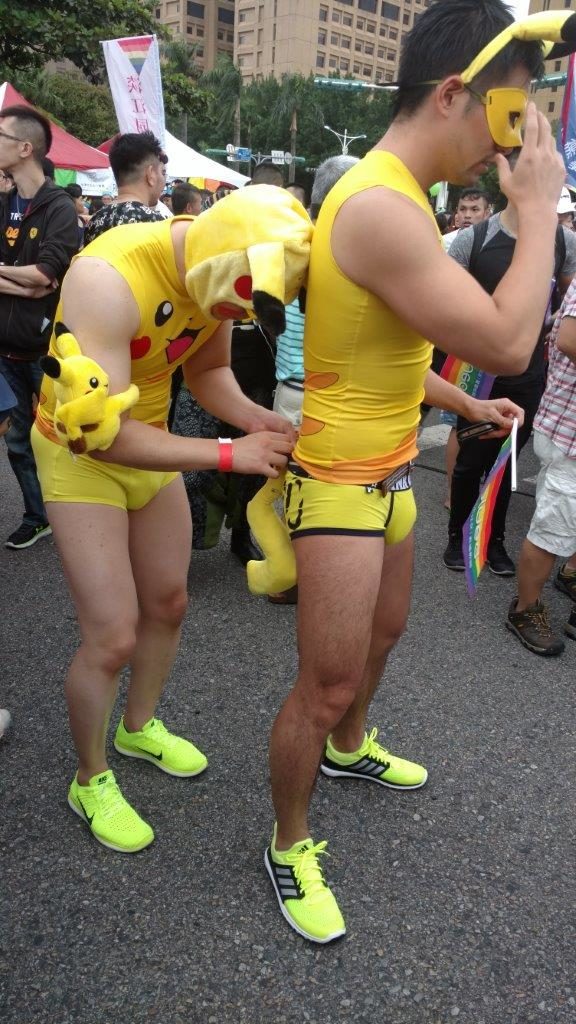 They do seem to love their Pokemon in Taiwan! These gentleman are getting ready for the festivities. Do you have your Pokeball ready? 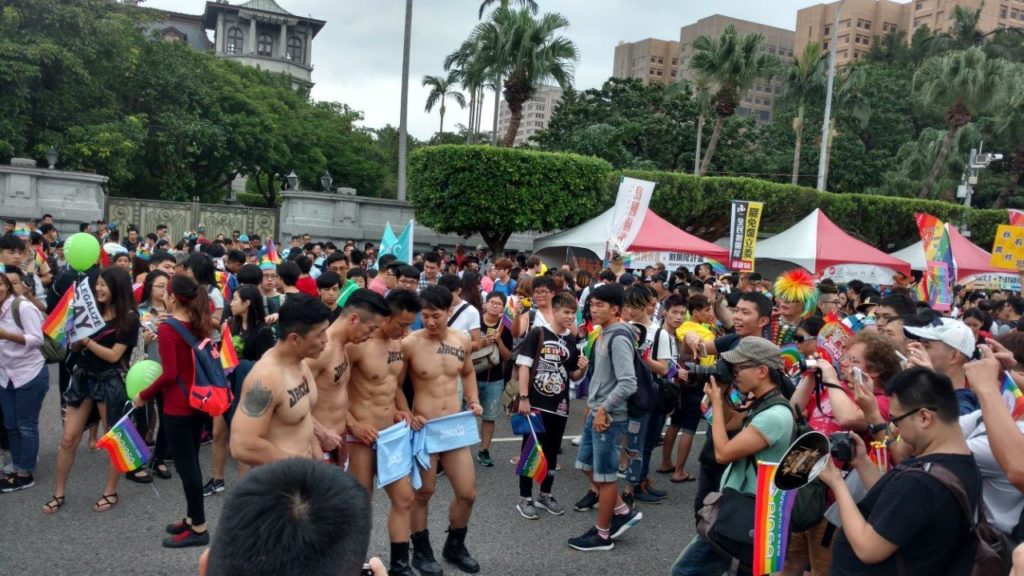 Gratuitous models for the Jack’D app 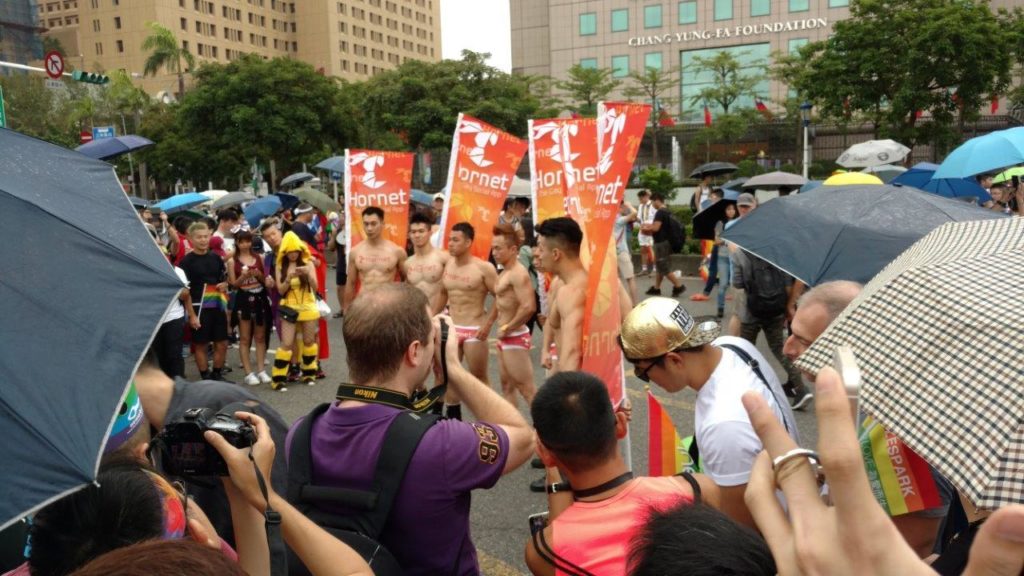 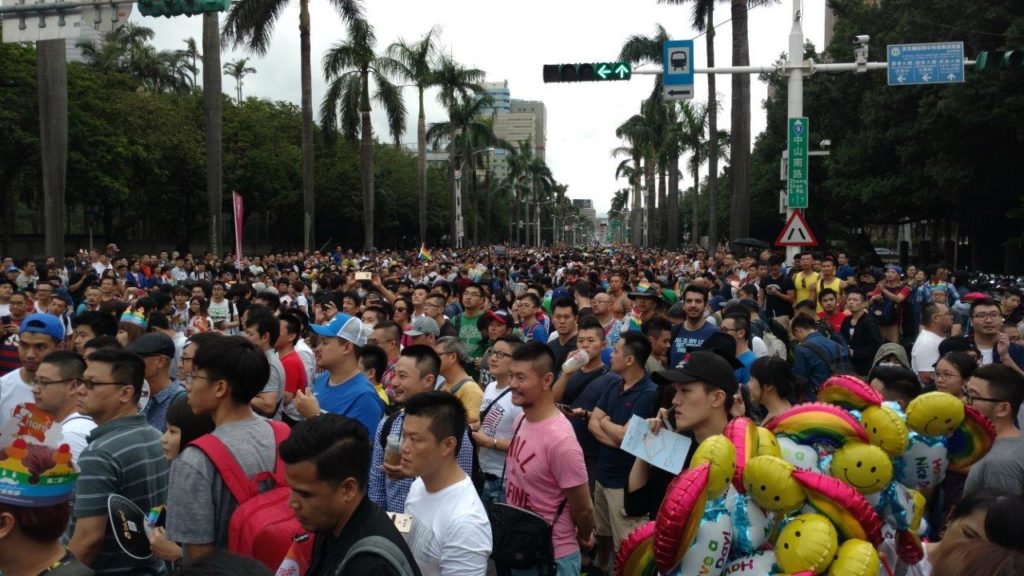 Being the largest Pride celebration in Asia, the day had a very joyous, very crowded feel. 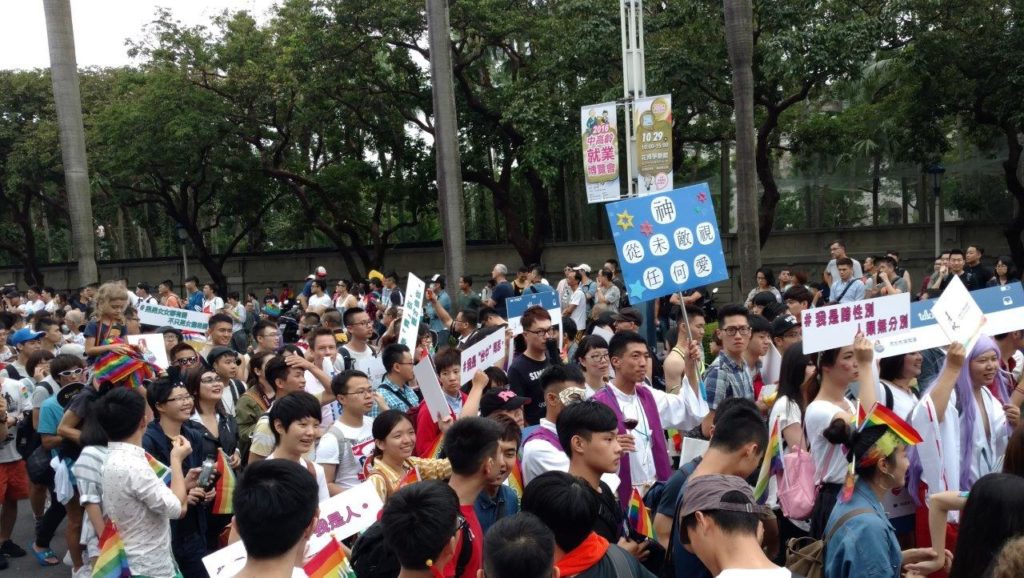 On the blue sign: “God has never been against love.” 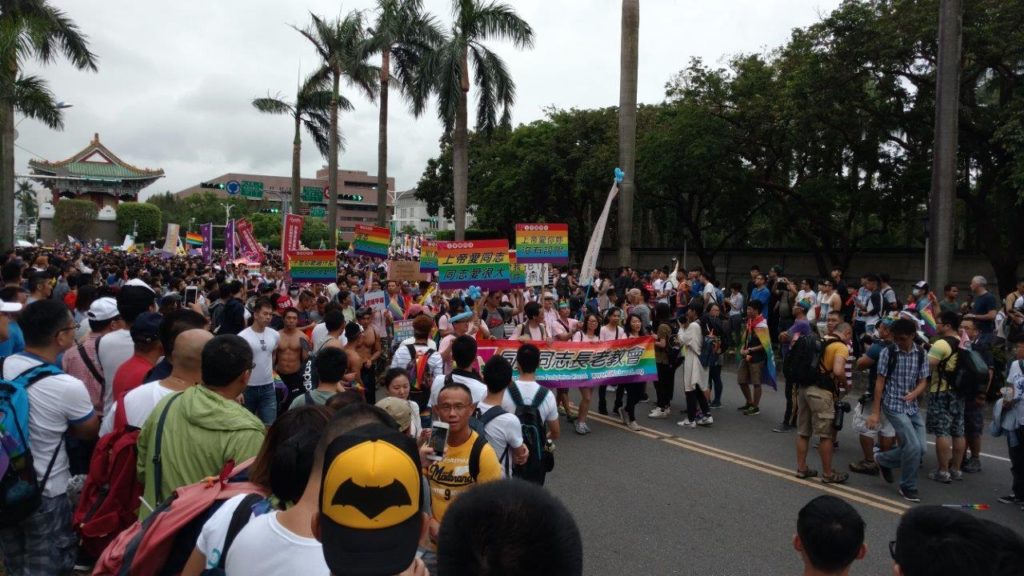 The signs may be in Chinese, but the feeling and meaning are the same as everywhere else. 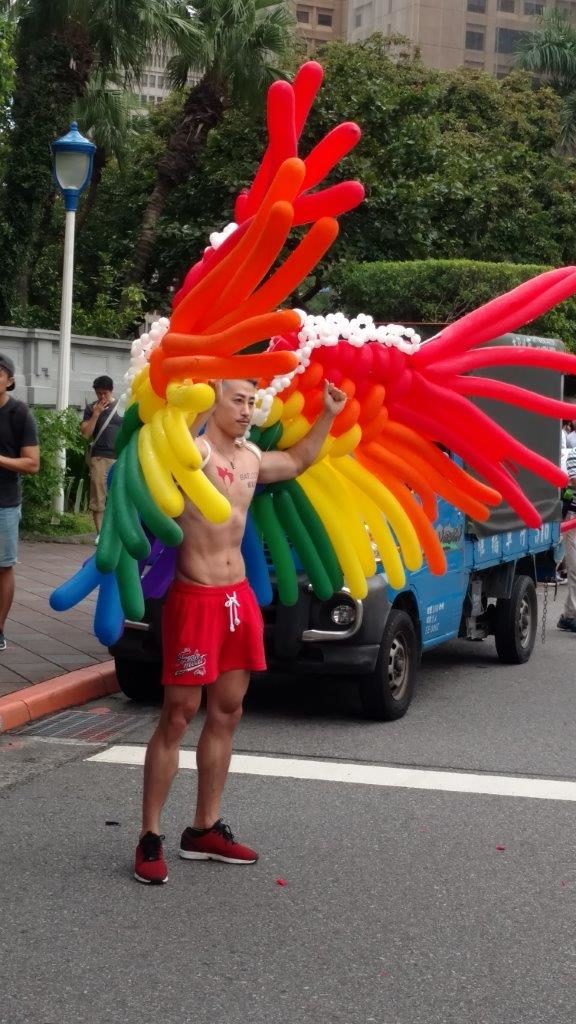 I admire the effort! 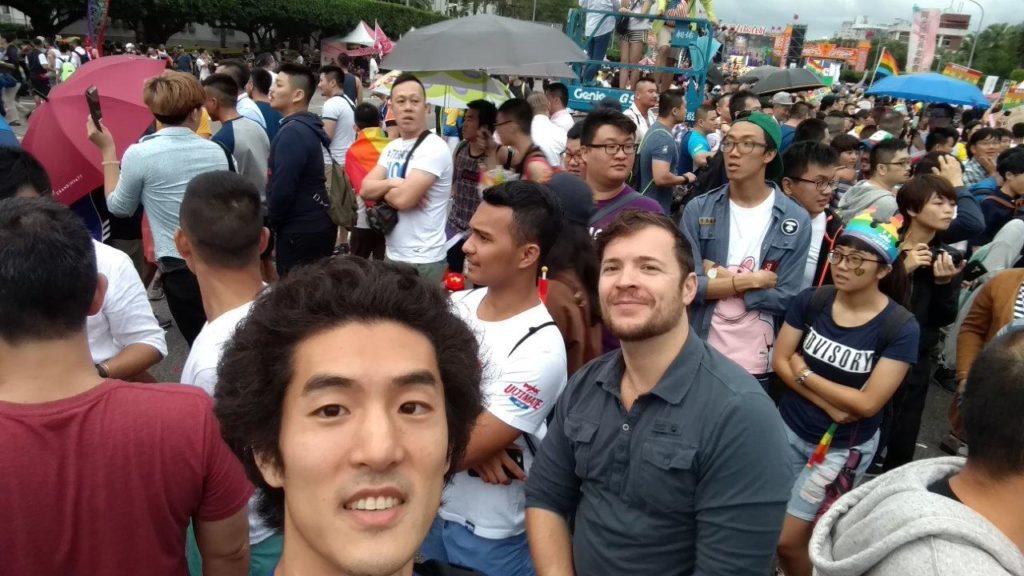 Looking at the camera is our new friend Austin, whom we met just the prior week in Seoul and saw again in Taipei, here for Pride festivities.

We had a fun Pride weekend in Taipei, celebrating with the LGBT community and also catching up on work for this blog, then headed down to Kaohsiung on Tuesday, November 1, via the impressive Taiwan High Speed Rail network. We continued to take it slowly in Kaohsiung, with only a couple main tourist excursions. The first was a daytrip to the Houtong Cat Village, a small mining town that reinvented itself as the townwide version of a cat cafe. The cats really rule the roost there, and we took a look around and said hello to some of the locals: 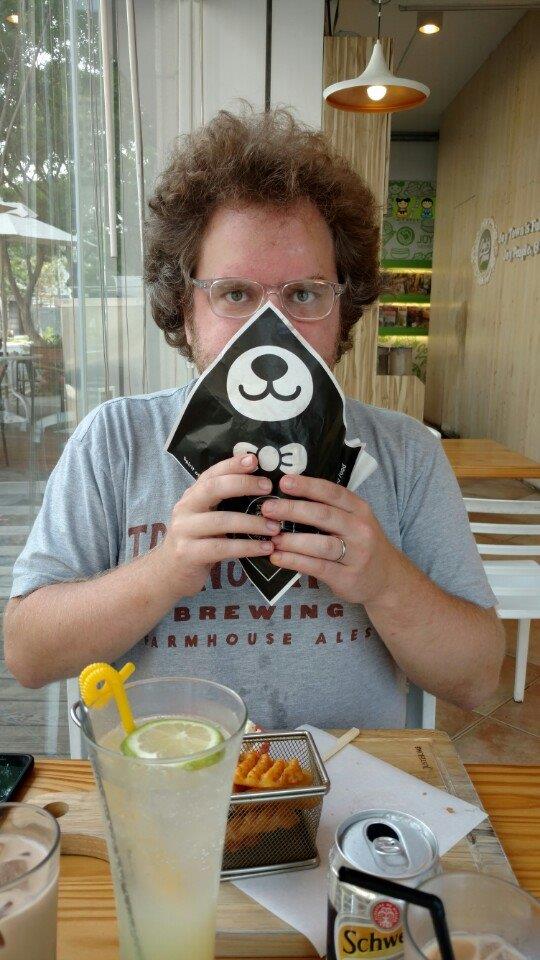 Suspicious character at this restaurant joining me for lunch in Kaohsiung. 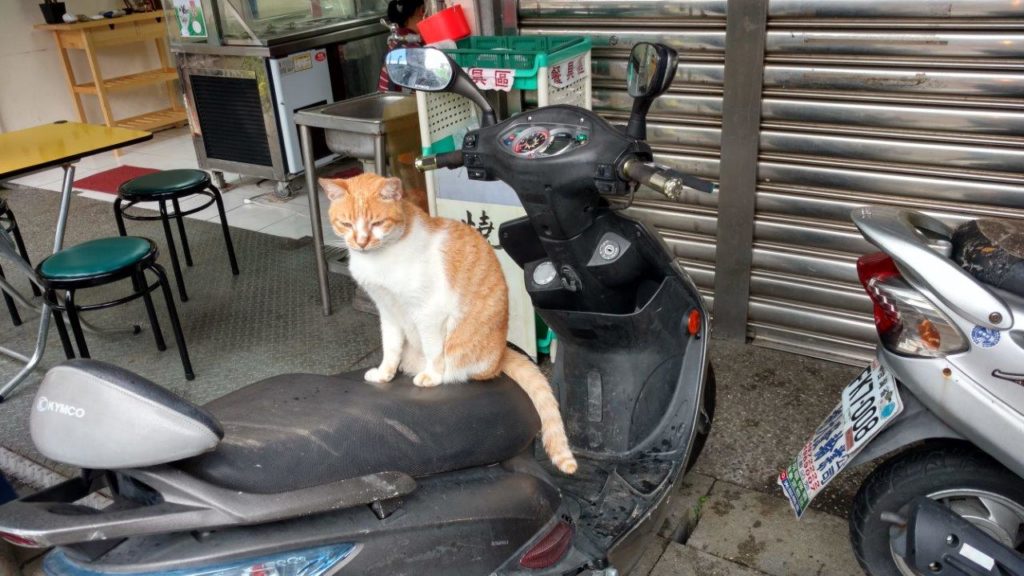 Silly cat, you don’t have a license yet! 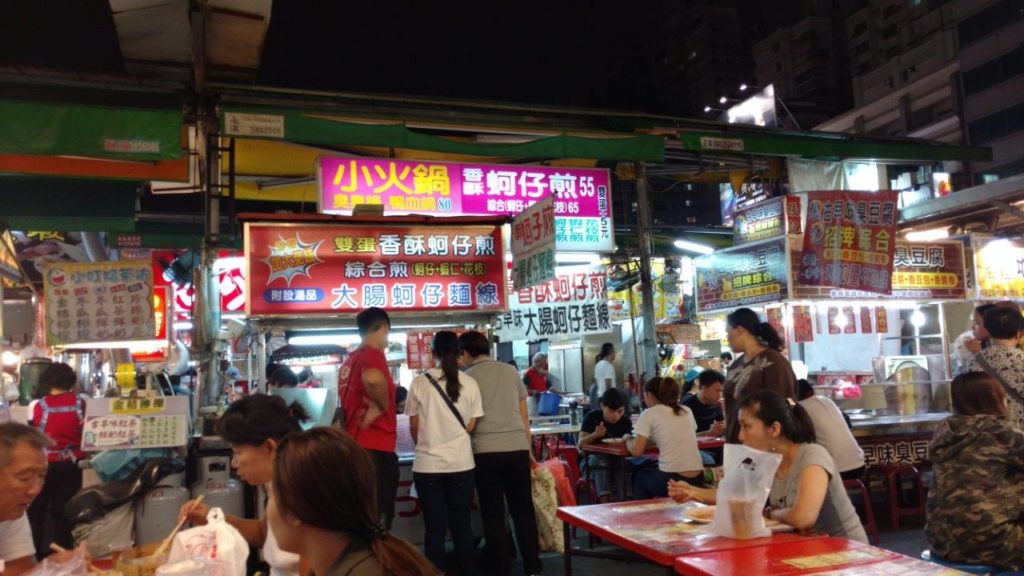 We stumbled on this night market by accident, but as usual, there were delicious finds everywhere. 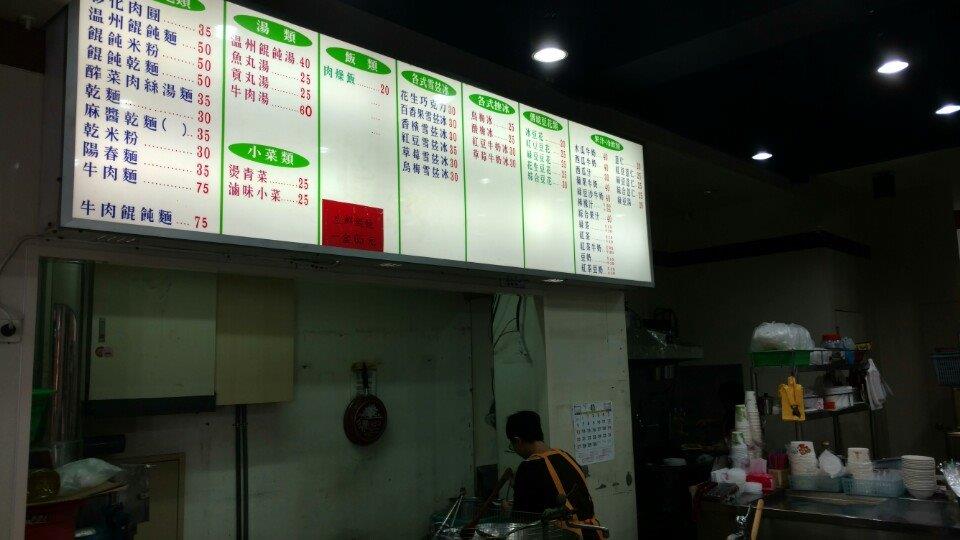 Some of the best meals you can have while traveling are at places without English menus, but it certainly would have helped if I knew more Chinese!

We did make sure to show ourselves to Cijin Island, a small and pretty beach island at the south end of Kaohsiung. Things were really prett, but the most impressive thing was watching the motorcycles get on and off the island ferry there! 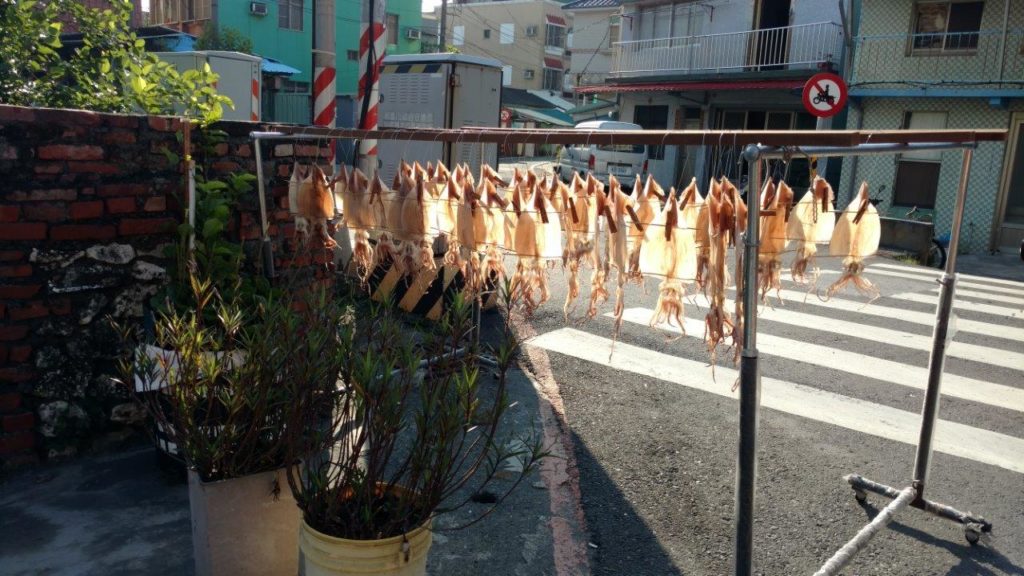 The day’s catch needs to dry out

Lastly, if you haven’t had the chance to take a look at Charley’s animal photos, note that the monkeys from his post were from a monkey mountain accessible by bus from central Kaohsiung. They’re so bold that they just go through hikers’ pockets when they’re foraging for food!