Friday, December 2, we headed west from the Philippines, bound for Yangon, Myanmar. (If you’re shaky on your geography, note that it’s sometimes called Burma, with different shades of political meaning depending on the name you use. The language and people are pretty universally called Burmese, however.)

Myanmar was another destination that neither Charley nor myself had visited before, and we were excited to see it. The infrastructure of the country is a lot less developed than its eastern neighbor Thailand, and while the capital city of Yangon (and our later destination Bagan) were modern and comfortable for tourists, a quick train ride into the rural areas surrounding the city showed us some of the less sanitary/modern conditions that some locals live in. Still, there was an incredibly rich cultural history to explore, with temples and cultural sights everywhere. 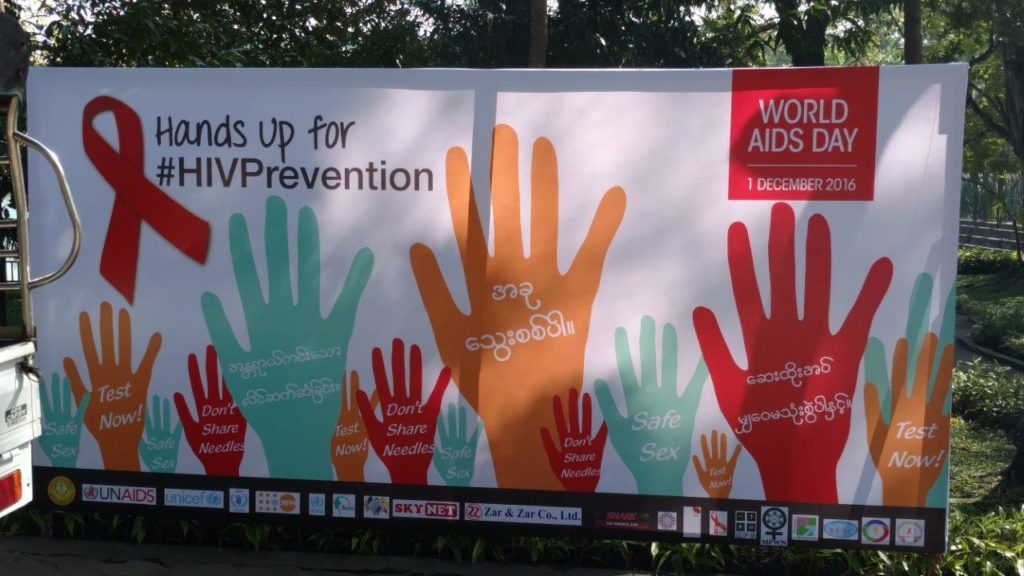 We just barely missed World AIDS Day, but it was good to see Yangon had its own activities. 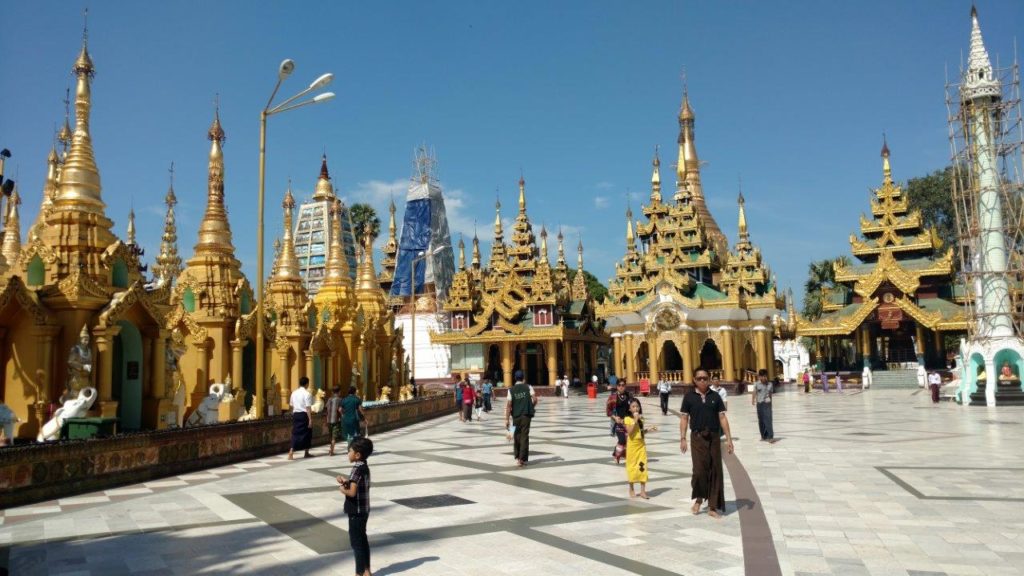 The Shwe Dagon Pagoda is completely stunning and awesome. Note that you have to be barefoot; we learned really quickly only to walk on the white tiles! 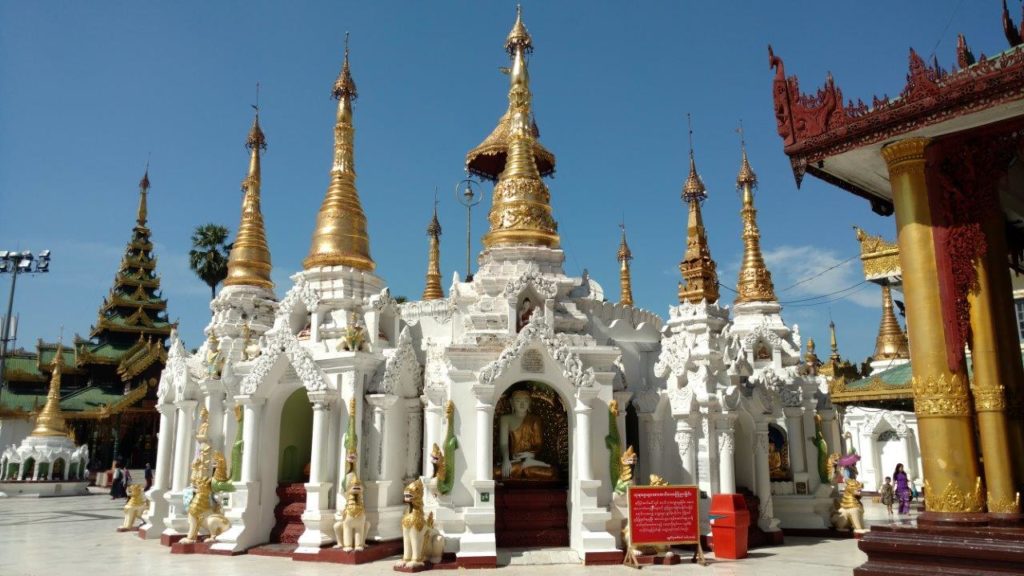 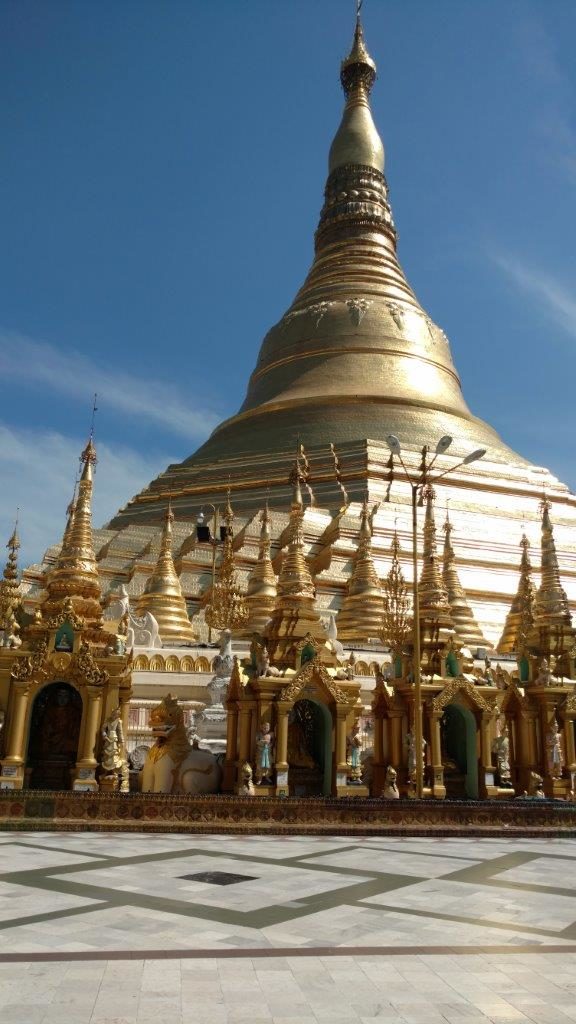 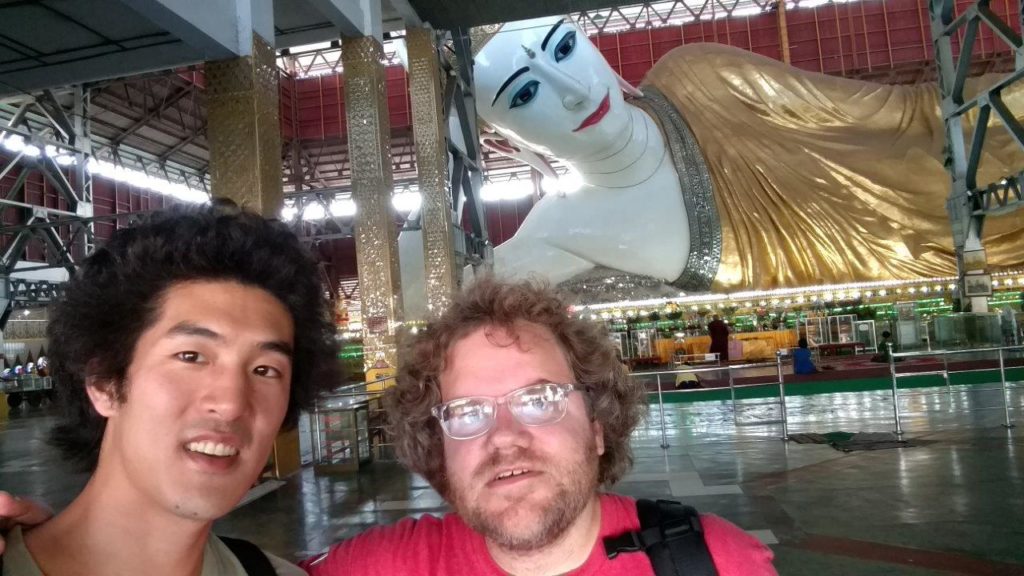 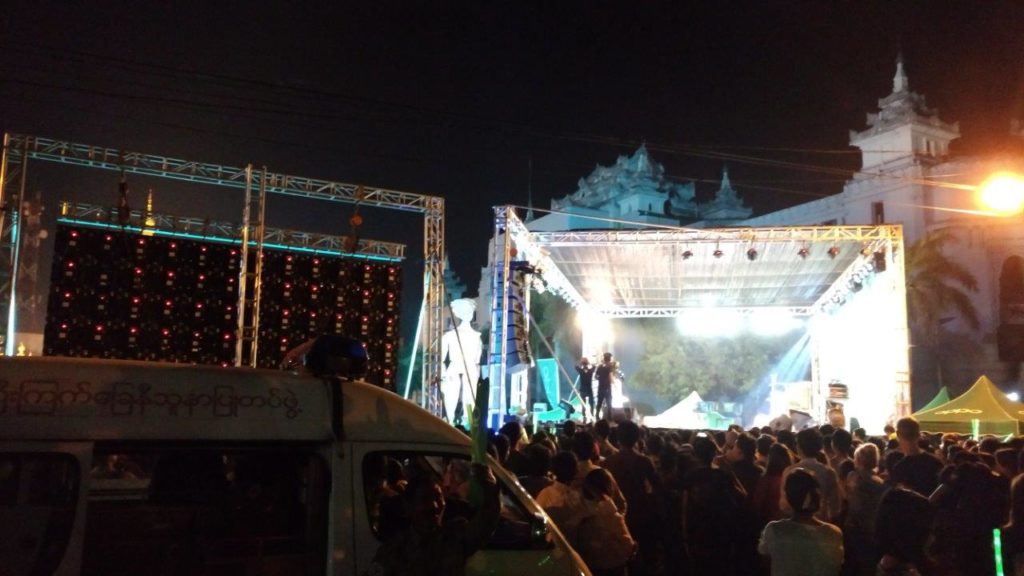 We were walking downtown when we realized we were passing by a music festival! 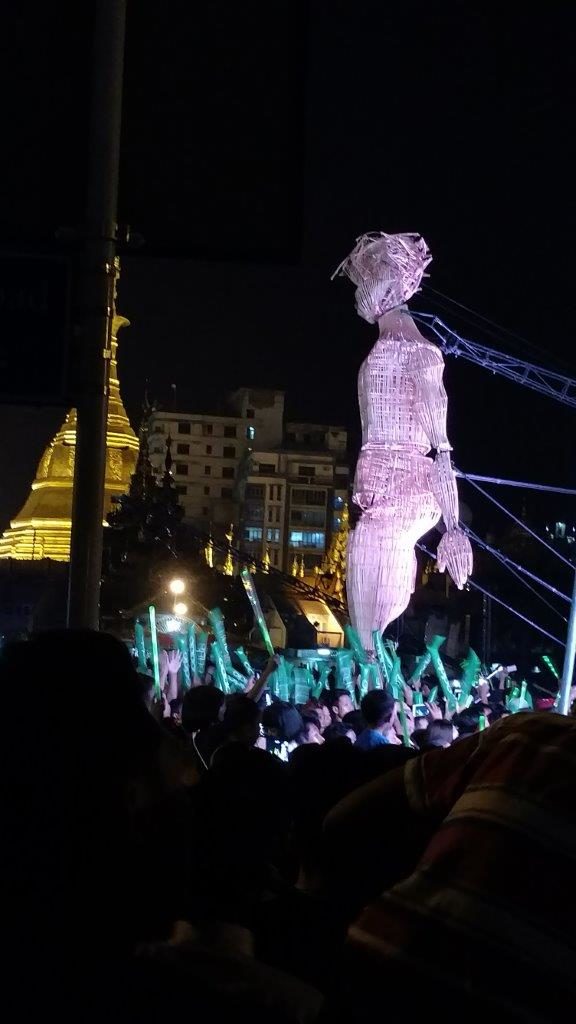 This enormous puppet/effigy was dancing around better than we were. 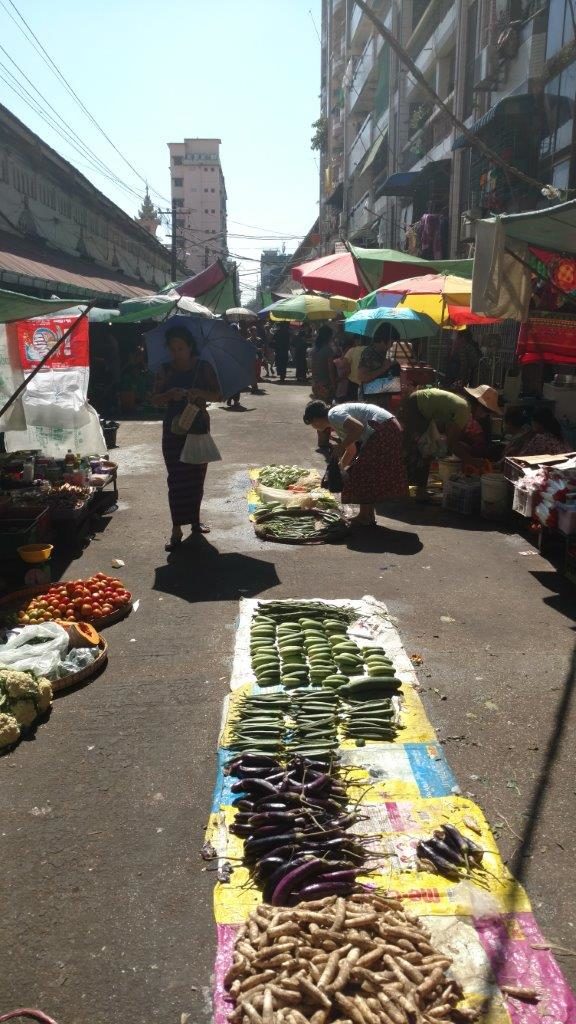 Thein Gyi Zay street market: we’ve visited lots of street markets before, but none where cars can keep driving through, and they just straddle the products! 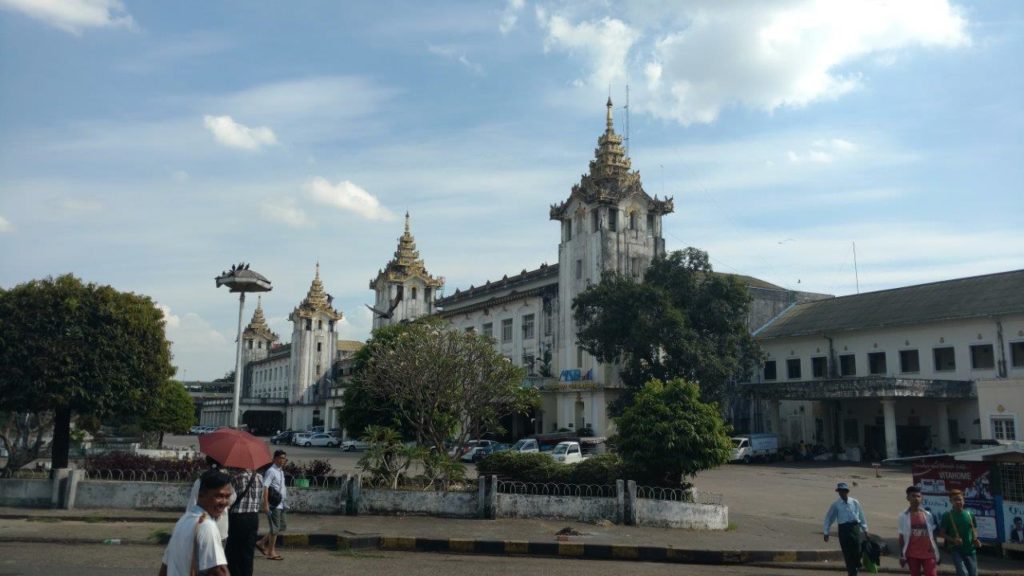 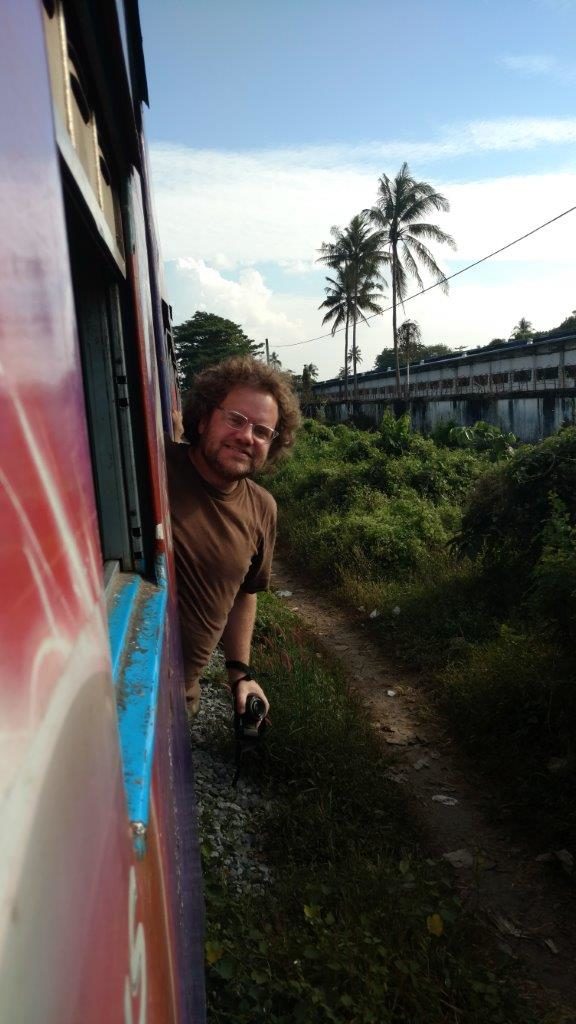 Charley poses while our train takes us around 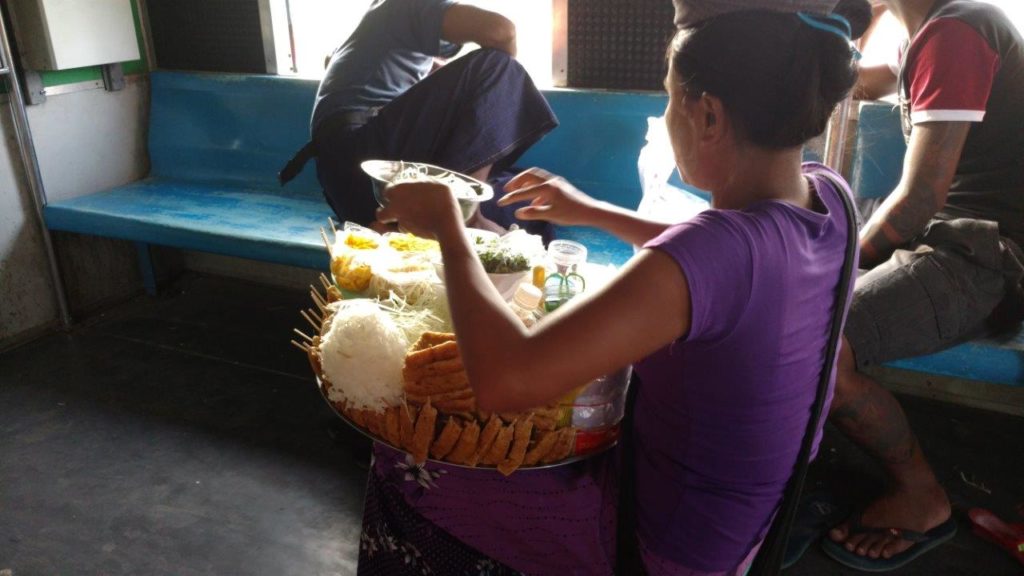 This vendor on the train carried her basket around on her head while looking for customers. 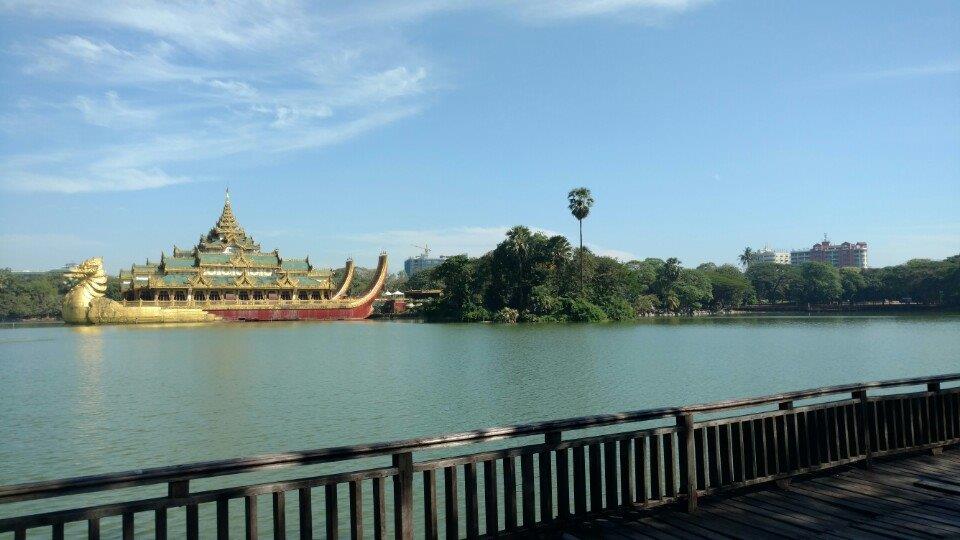 Locals also enjoy the fact that we have unusual hairstyles, and one gentleman actually asked if he could snap a picture of Charley with his son. Of course, he did this with a wordless pantomime and then didn’t explain anything to his son, who was really scared of the stranger who was getting close to him. On the boy’s face is a paste called thanaka, which is made from ground bark and is common among locals in Myanmar.

After a few days in Yangon, we headed north to Bagan by bus. It’s the most popular tourist destination in Myanmar, and it’s not hard to see why. After becoming a centralized major power about a thousand years ago, there are now thousands of beautiful Buddhist temples around the city, with a large majority of them abandoned or in various states of disrepair.

The most popular tourist activity is to simply rent an electric bike or scooter and drive around town, exploring the ruins and temples that one happens across. Some of the larger ones are kept in better shape, with a large tourist crowd at sunrise and sunset. 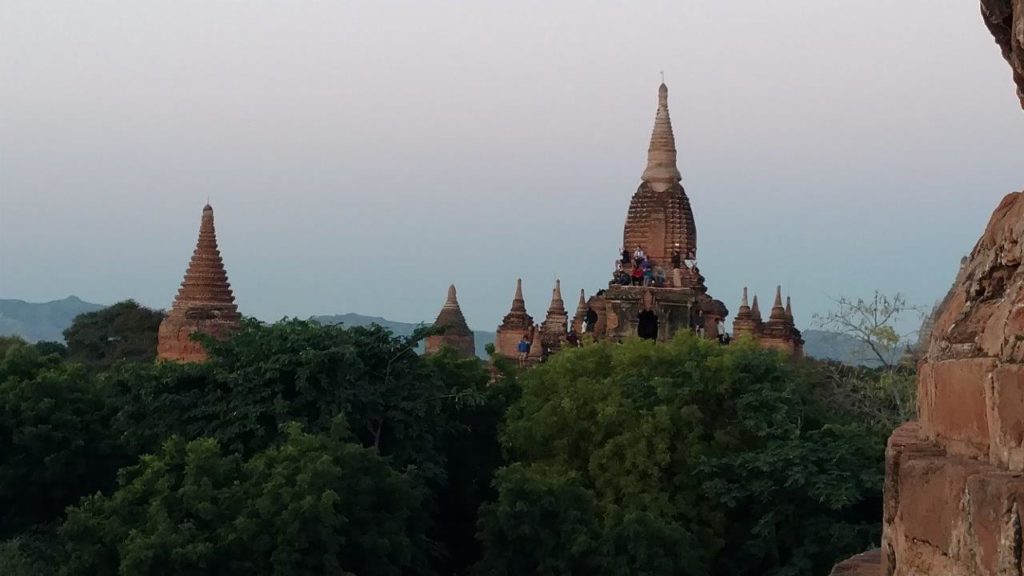 Sunrise crowds can get pretty dense, especially on taller temples with a good view. 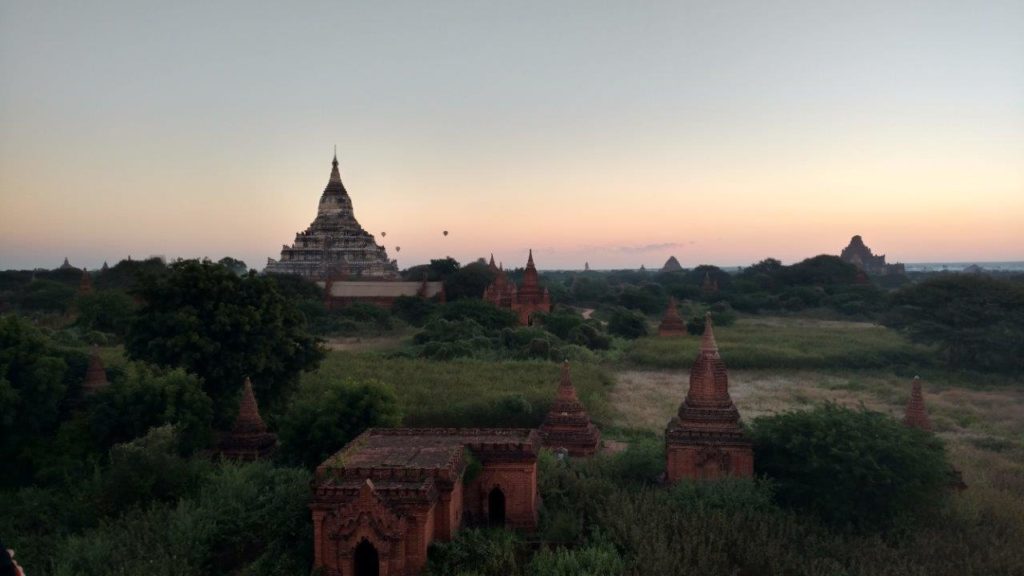 The Bagan Plain is covered with abandoned temples, and a balloon’s eye view would capture it all beautifully. 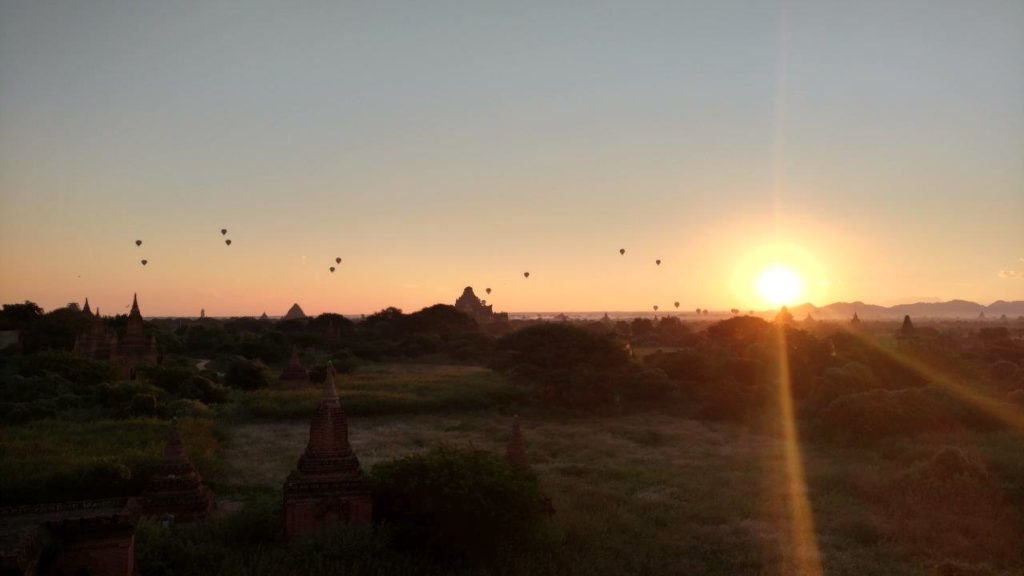 Balloons are timed to finish at around the time of sunrise. 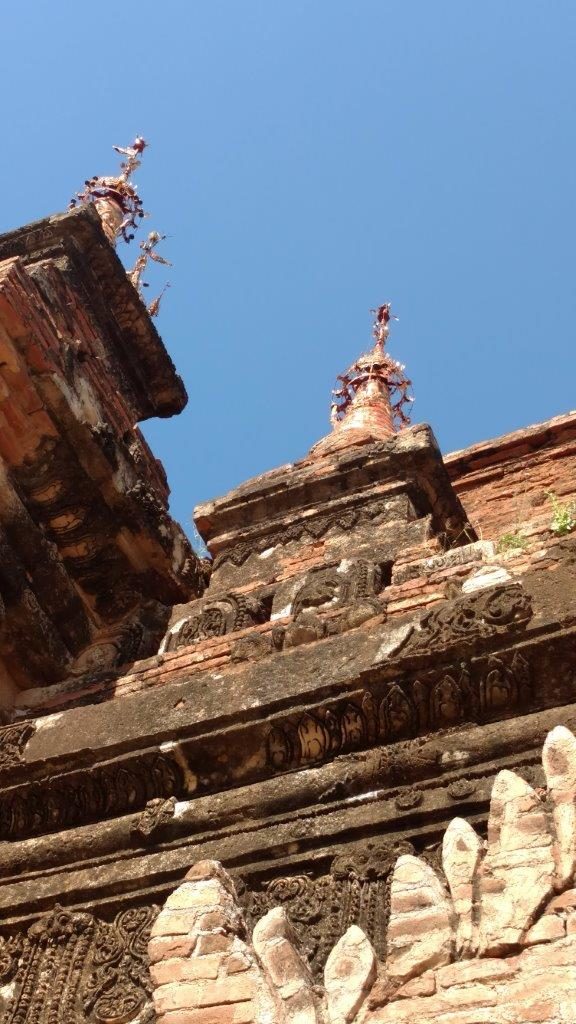 Some temples are more ornate than others. 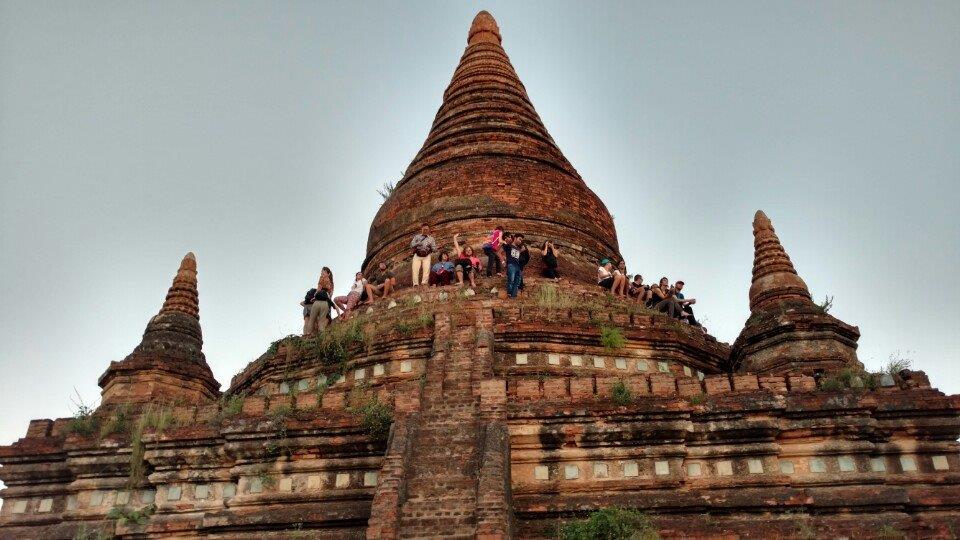 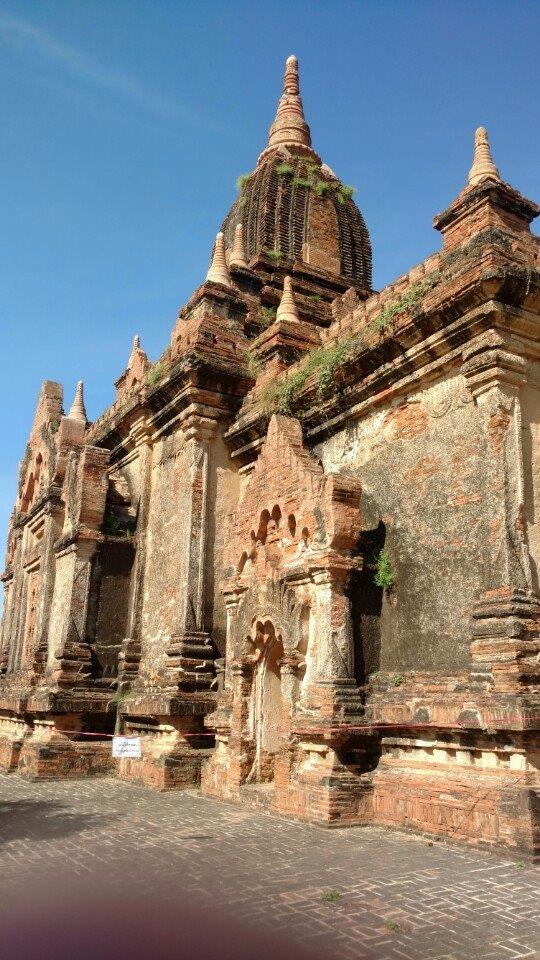 Many of these temples haven’t been visited by a local in weeks. 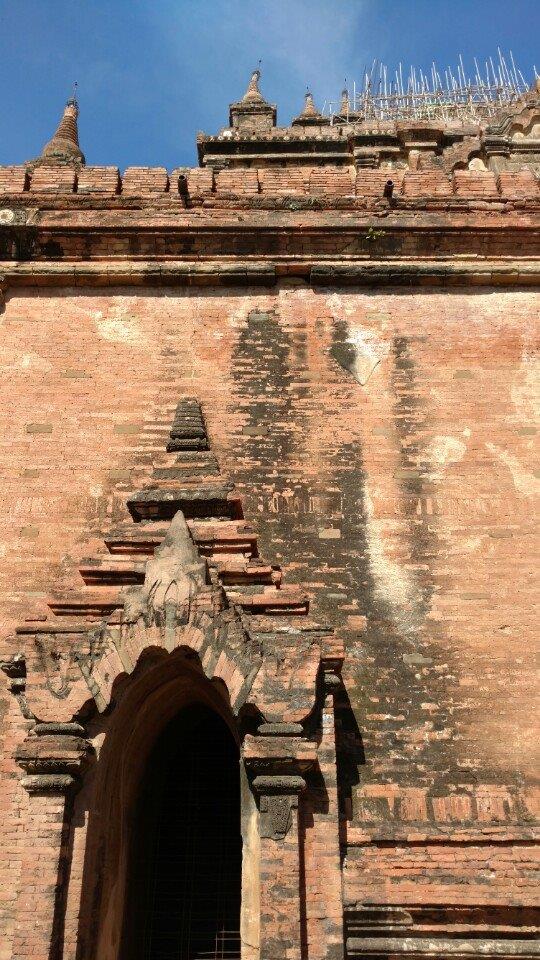 Sulamani Guphaya: Beautiful, and note the scaffolding at top for the maintenance work 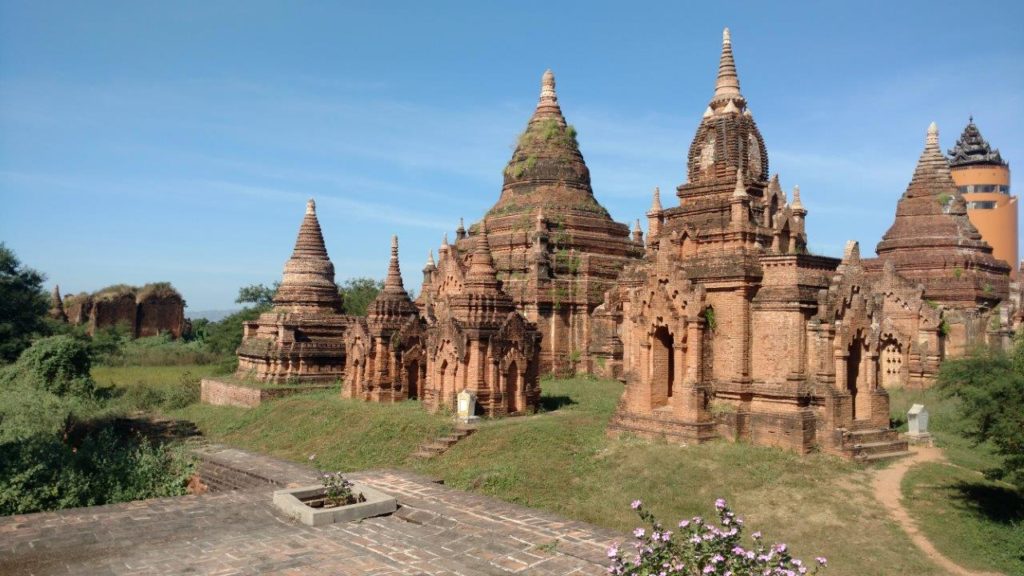 After plenty of searching, we did finally find a nice viewing temple, with great views during the day, and made sure to come back for sunset a few hours later. 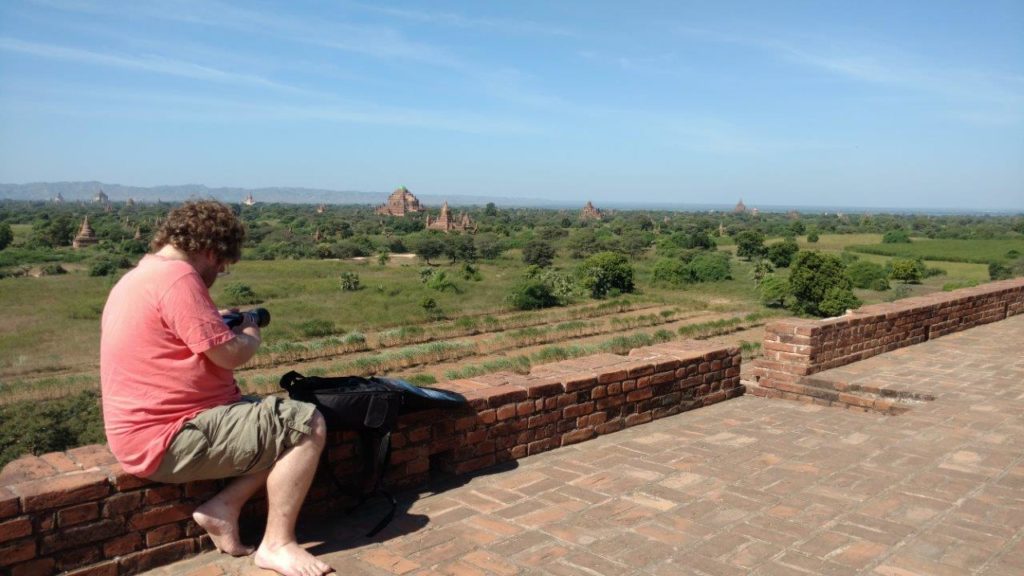 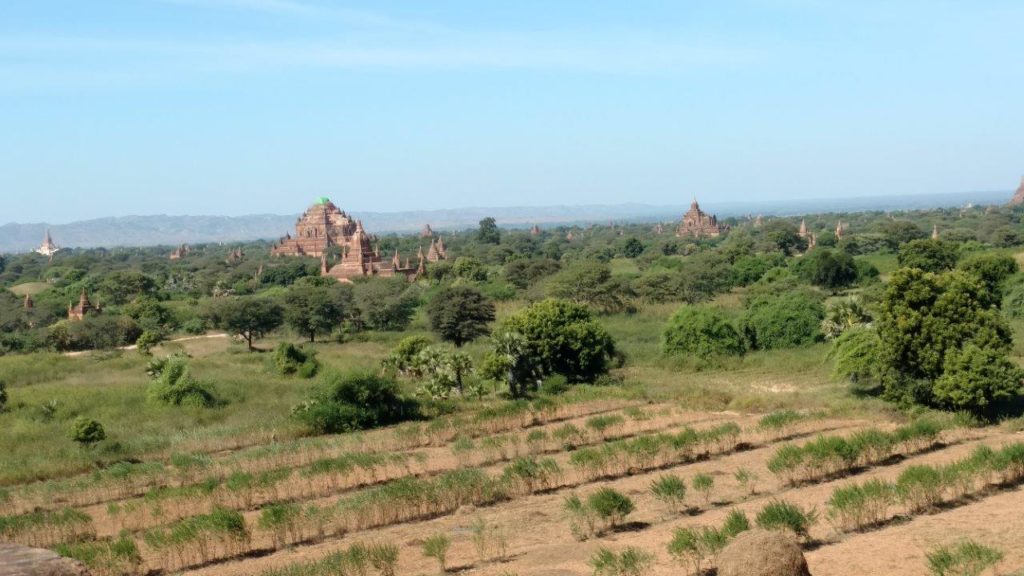 The whole plain is just so full of old temples. It’s amazing. 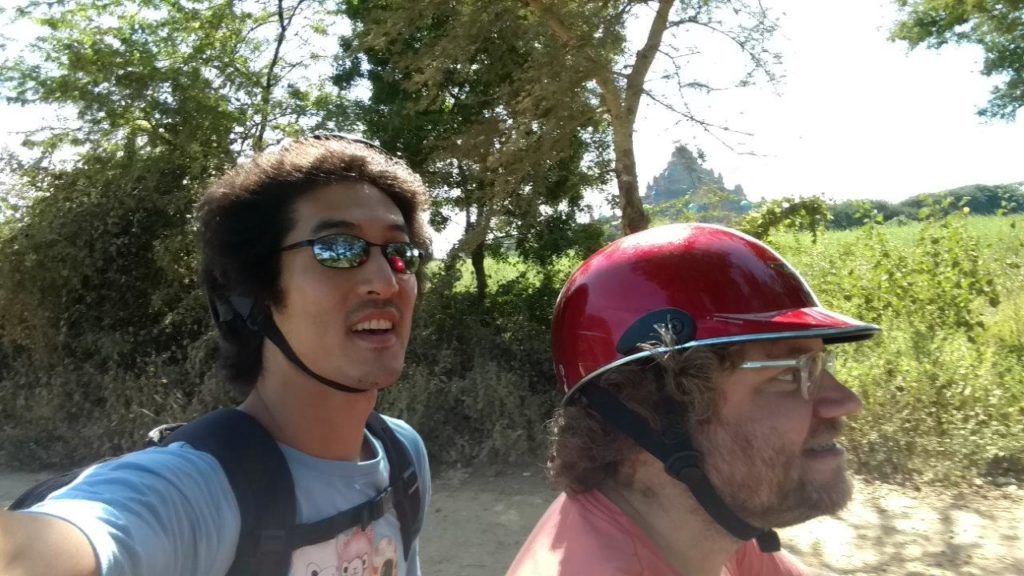 Bye, Myanmar. See you next time!