On Monday, January 23, 2017, we traded in our New Zealand rental car for a Spaceship. If that sentence caught you a little off-guard, then perhaps I should explain that when I say we drove a “Spaceship” around New Zealand, I mean one of these fun little vans. With the cost of hotels through the roof in New Zealand, we spent much of our time on the South Island camping, and for our time on the North Island, drove around this campervan that converted into a full-size bed for sleep.

Our first major stop on the North Island was a trip west to Kapiti Island, a small uninhabited island off the coast. It’s home to a number of native birds not found anywhere else, and with no natural predators on the island, they have no instinct to avoid the ground. You can usually walk right up to them or even find them trying to poach some of your lunch off you. 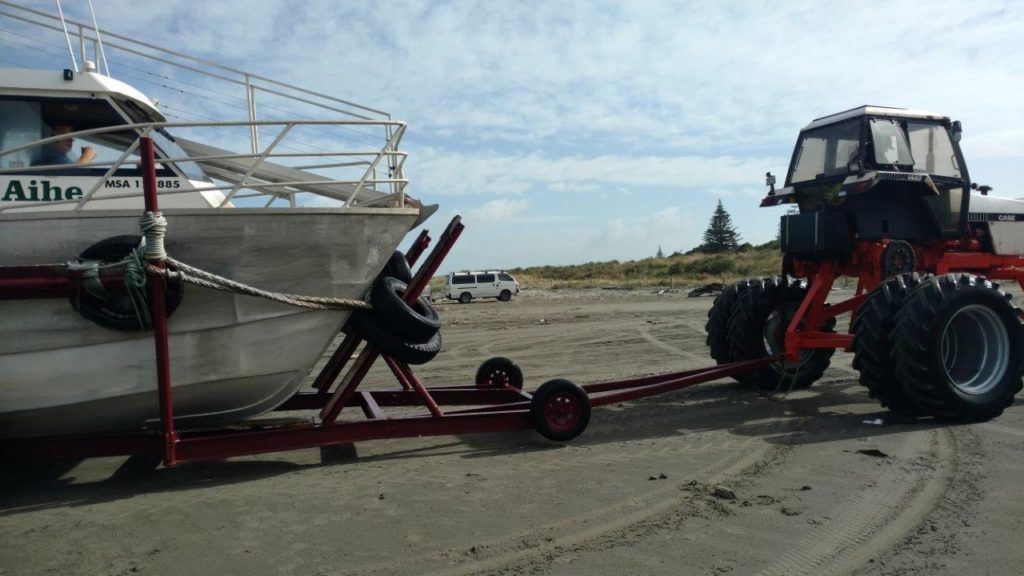 En route to Kapiti Island, this tractor-looking thing actually TOWS the boat into and out of the ocean 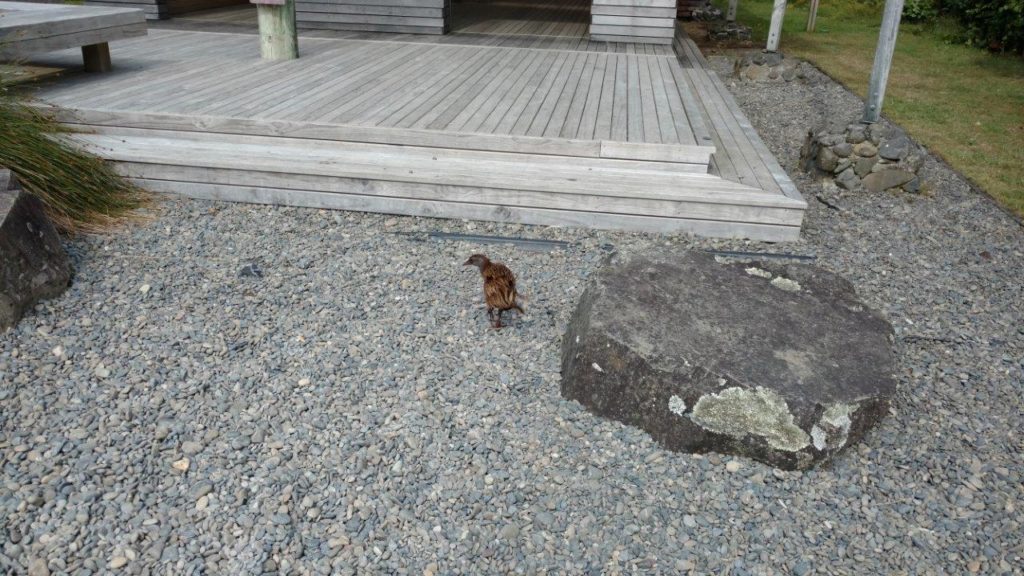 This adorable little fellow is called a weka-weka. 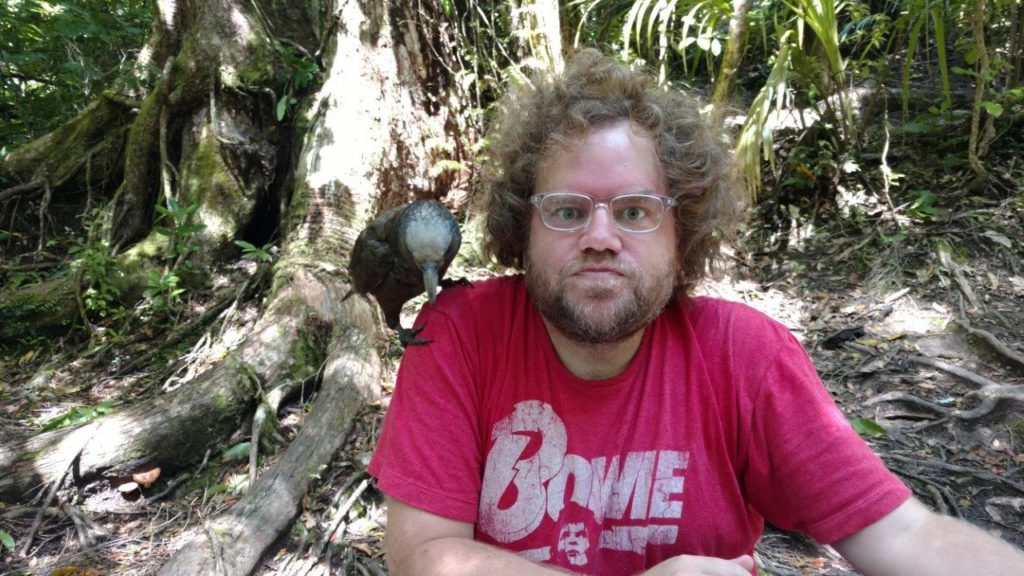 The European tourists always get a chuckle out of learning this bird is called the “Kaka.” *giggle* He was aggressive about trying to steal our lunch!

One interesting side note regards mammal life in New Zealand. Prior to European colonization, birds in New Zealand had essentially no natural predators. There are stories about ships docking on the island, and sailors about being unable to sleep because the bird calls were so loud and never stopped. However, these days the introduction of predators like rats, possums, and stoats has really decimated birdlife in New Zealand. They’re considered to be introduced pests that need to be eradicated, and based on the number we saw dead on the road, the motorists in New Zealand certainly try to do their part to kill off as many possums as they can! 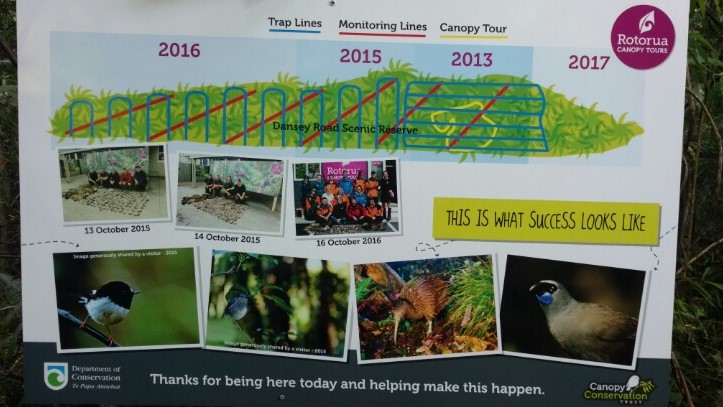 It’s a little gruesome, but if you can see the October snapshots, they’re bragging about how many predators they’ve managed to kill. 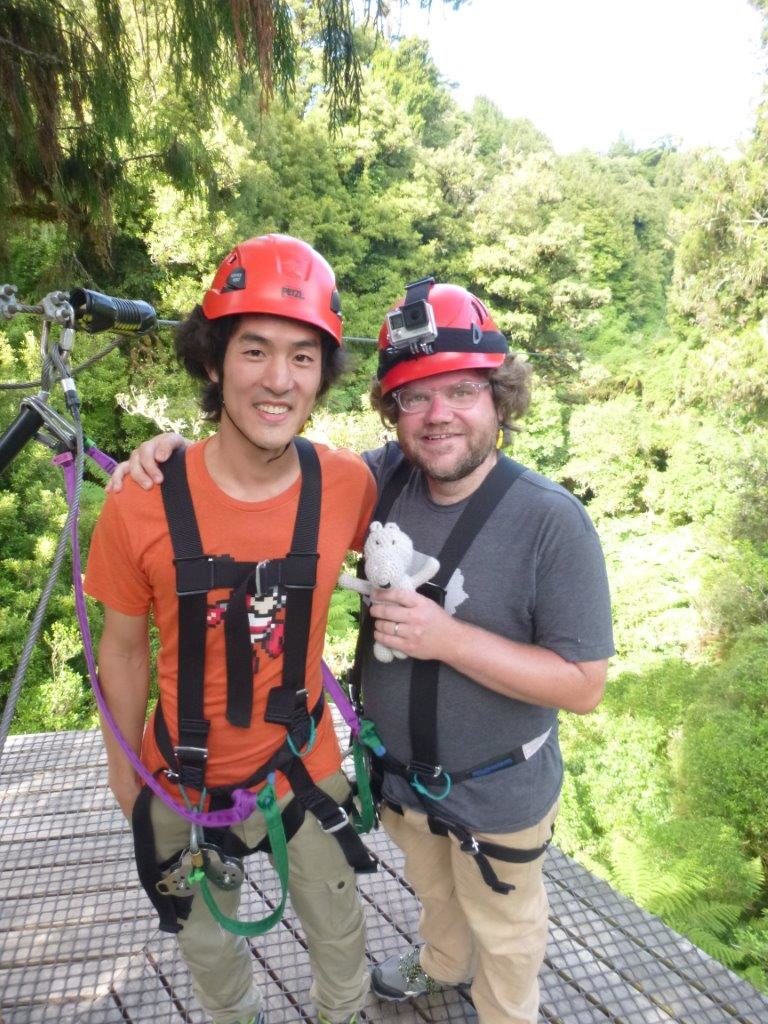 Craig and Charley, with our buddy Henry who’s been with us on our travels

For our rafting expedition, we were paired with a pair of British doctors now based in Auckland, Ellie and Ben. We were every bit as coordinated as you would expect four nerds to be while we tried to navigate the rushing waters. Our guide (whose name has slipped my mind) spent most of the trip giving us all a hard time about how uncoordinated we were and spent the entire trip calling people “bro” and saying things were “wicked.” He was a pretty hilarious stereotype of a California surfer dude (but of course a local New Zealander), but made sure to be inclusive when the photographer was stationed to snap kissing couple photos: 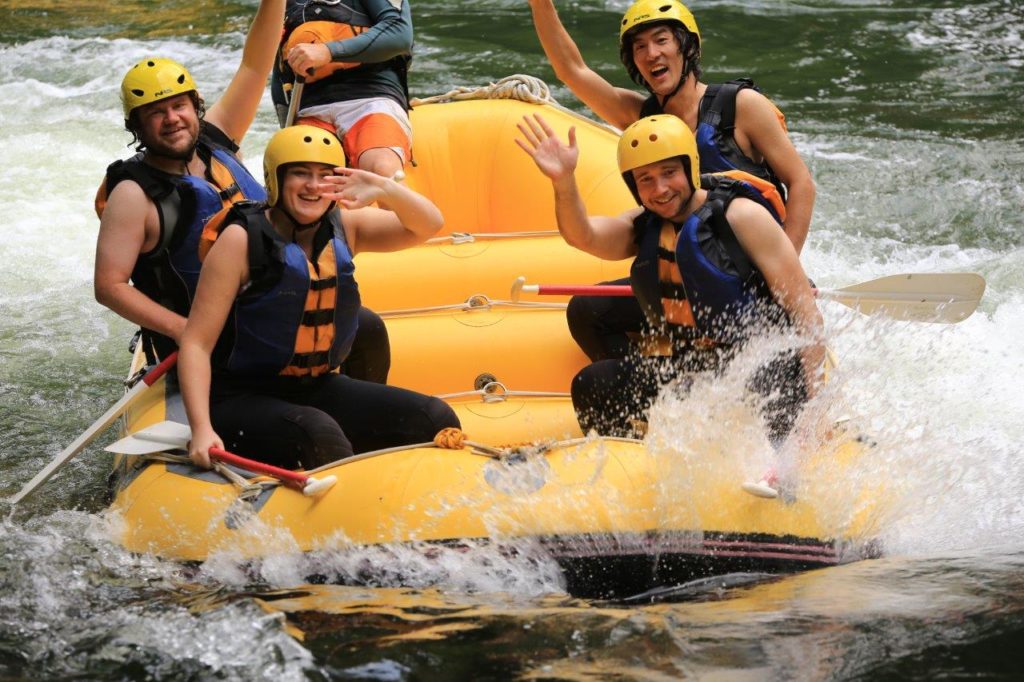 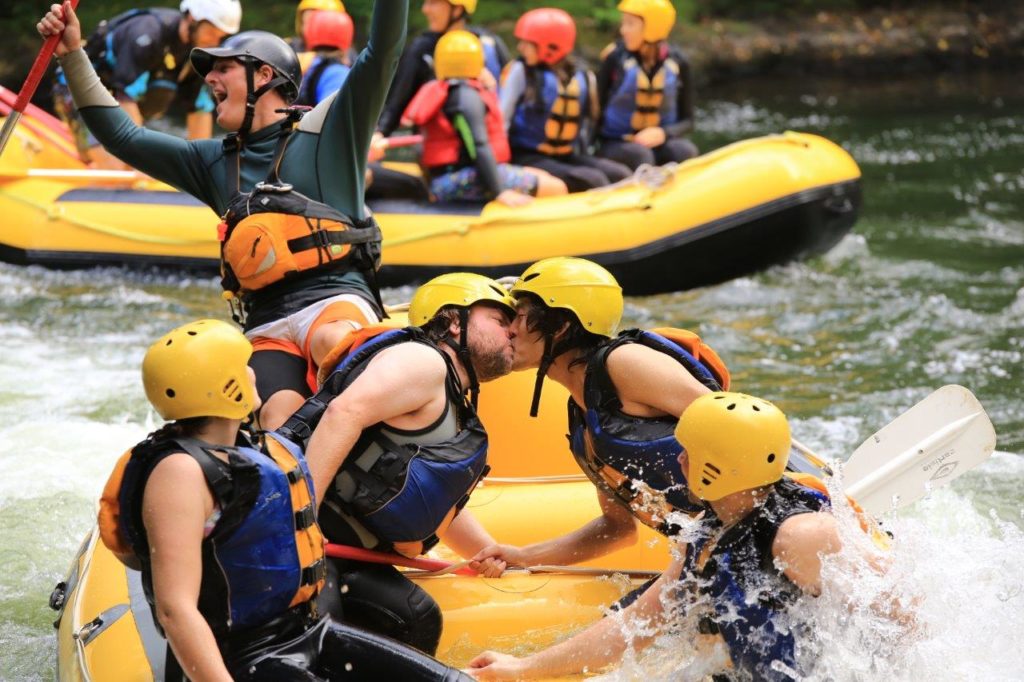 “Not sure if you guys are just bros or… oh, then smooch it up, guys!” 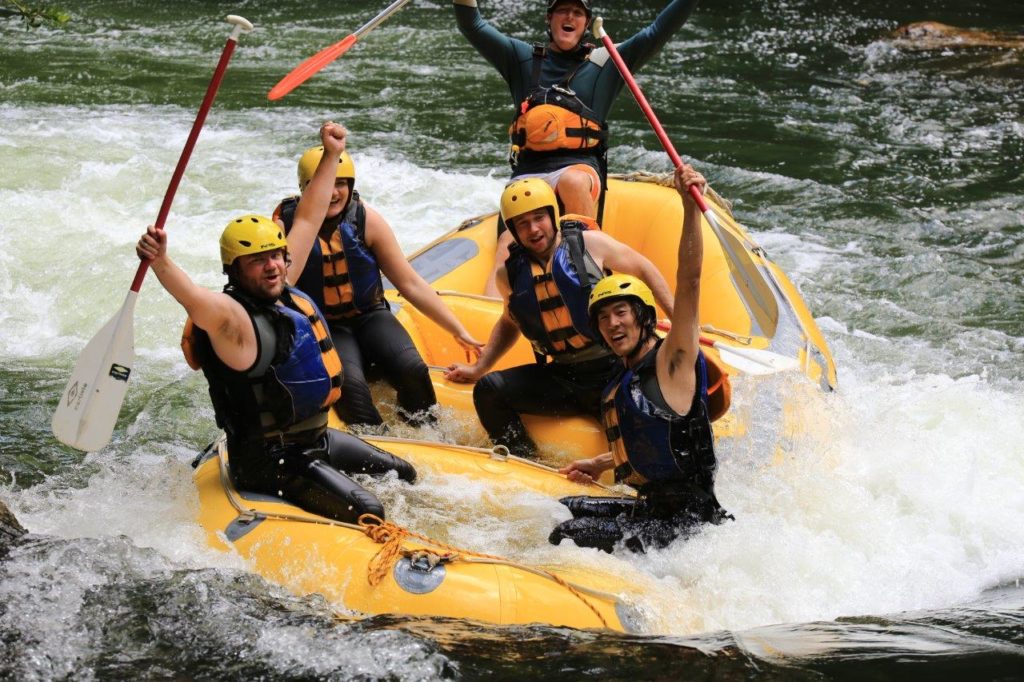 Our time in the North Island was jam-packed. After our outdoor activities, we still had more to go. I’d be remiss if I didn’t make a quick mention that this was another wonderful chance in our trip to spend time with family again, as Charley’s cousin Emma (whom you may remember from our time in Vietnam) was in New Zealand for a quick getaway, and we were able to see her again over a nice lamb dinner, as well as meet her wonderful friends from college, Nick and Bianca. Hi, guys, if you’re reading!! 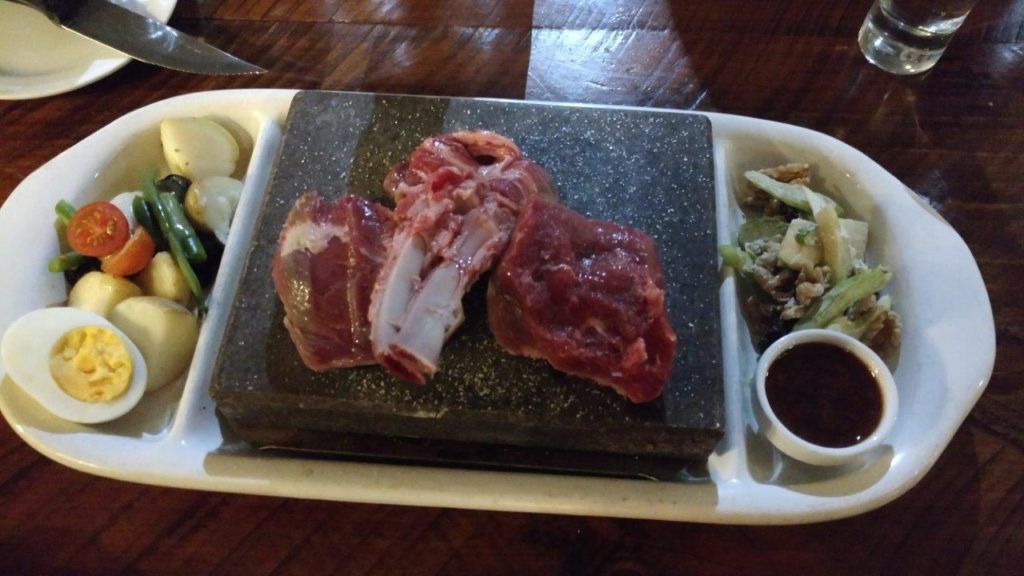 New Zealand lamb is in a class by itself, and the stone tablet here was presented hot so we could cook it to our own liking.

Of course, no trip to New Zealand is complete without a stop in Hobbiton. The farm used as a filming location has since been maintained and kept intact, turned into a fun tourist attraction where fans can swing through and take pictures at some of the incredible Hobbit Holes and even get a drink at the Green Dragon. 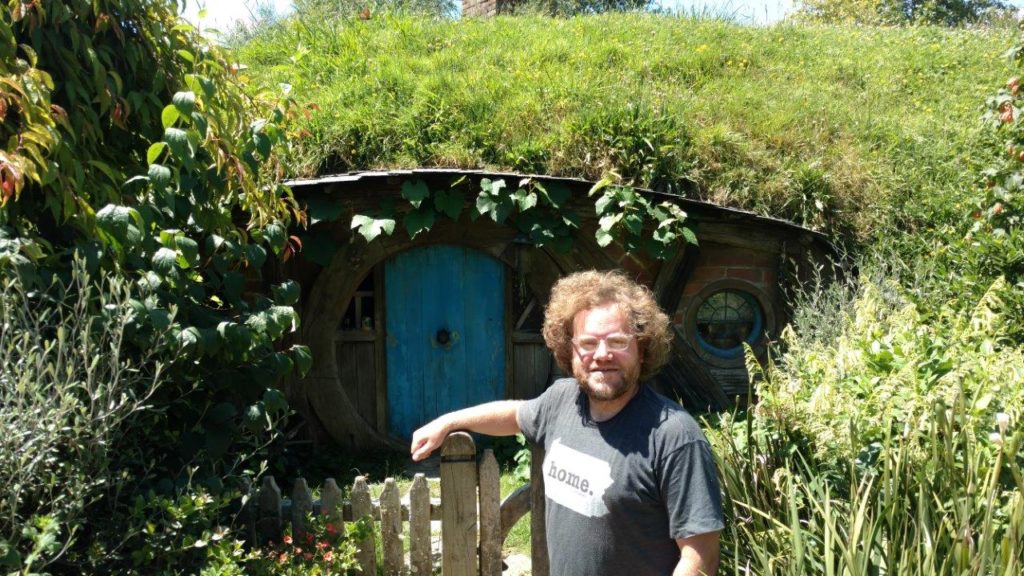 What an adorable small Hobbit Hole 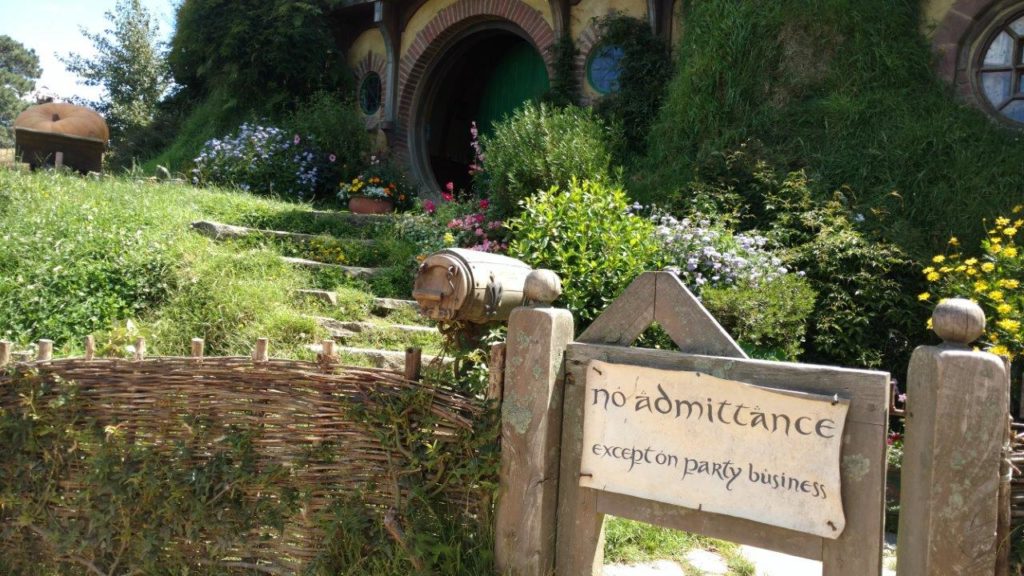 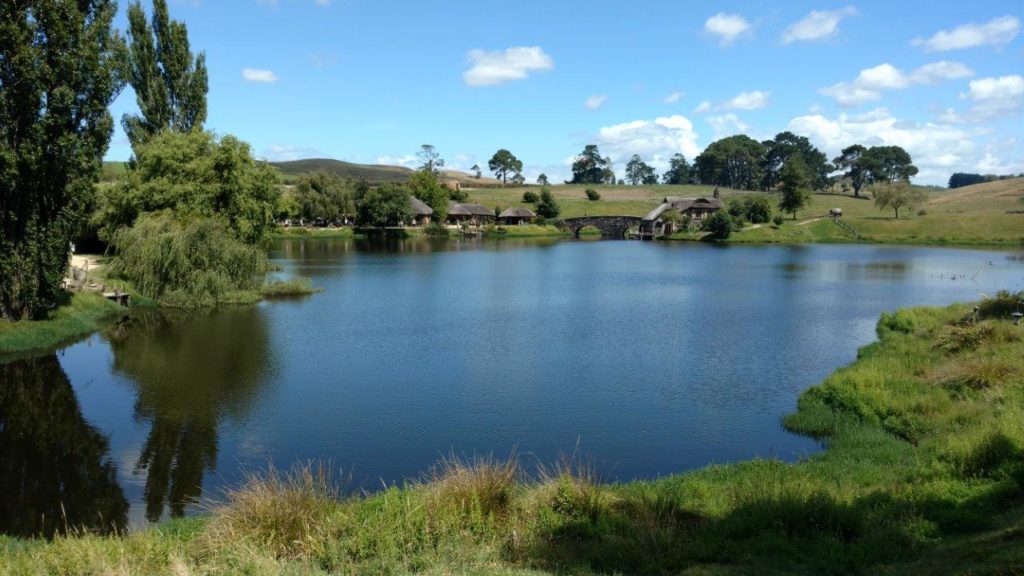 New Zealand was absolutely incredible and stunning, and we had some of the best experiences of our trip so far there. We have to reserve one very special shout-out to our new friends Kaylene and Stuart, whom we met over drinks one night in Rotorua. Part of the fun of traveling has been not just seeing the sights, but also observing the people who live in various spots around the world. After the social lubrication of a few drinks, we met Kaylene and Stuart in the local beer bar, who it turns out had just completed a vacation of their own in the U.S.! They loved it, and it sounds like they had an authentically American experience, traveling through New York and Nashville and even the deep South, going so far as viewing a southern gentleman’s private gun collection in his home! They were in such the vacationing mood that they kindly hosted us for dinner one of our nights in Rotorua, and we couldn’t have been more pleased to have made such great new friends on this crazy trip of ours. Until next time, guys! 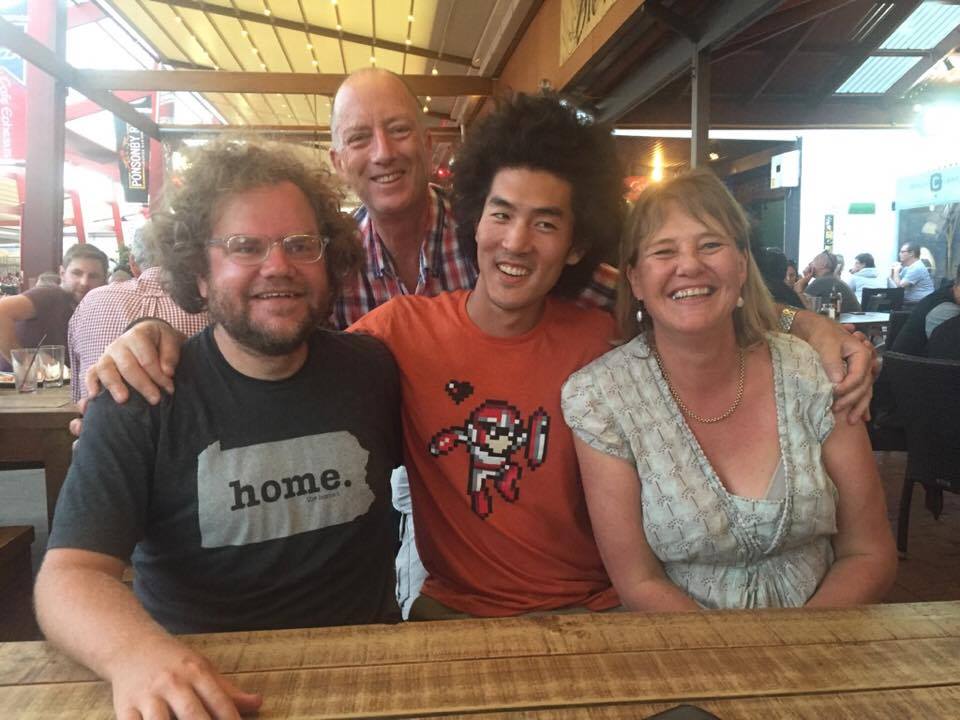 At the bar with our new friends Kaylene and Stuart