On Sunday, February 5, 2017, we fulfilled our biggest longshot goal (by a mile) and landed on Easter Island. Everything about it was incredible, and we’ll break down everything it took to get us there, as well as try to describe what it was like during their annual Tapati Festival.

Where is Easter Island and Who Lives There?

Easter Island is a remote island in the Southern Pacific Ocean, named Easter Island because Western explorers first found the island on Easter Day in 1722. It’s one of the most remote inhabited places in the world, with only a single town on the island and a full-time population of of somewhere between 6,000 and 7,000 people. The island is under the control of Chile, so communicating with the locals is helped by knowing a little Spanish. In addition, there are very strongly maintained influences from the indigenous people known as the Rapa Nui. (When I use the word “indigenous” here, I refer to the people who populated the land and lived here before European settlement. Americans refer to our own indigenous population as Native Americans, but the term gets used all over the South Pacific Islands, as well as Australia and New Zealand. New Zealand refers to their indigenous people as Maori.)

Hello, Chile! We’re so very far away from you and everyone else!

Until very recently, Chile was very “hands off” in their treatment of the island, which allowed the Rapa Nui people to maintain and preserve their culture substantially better than most other indigenous cultures. There is a Rapa Nui language, not spoken anywhere except on the island; in the Rapa Nui language, the island itself is also referred to as Rapa Nui! If the term “Rapa Nui” itself feels familiar, it was the name of a movie in the mid 90’s that’s (very) loosely based on some of the folklore and legends of the indigenous culture. From what we’ve read, the filming of the movie brought a huge number of Hollywood-types to the island, as well as all the money that normally accompanies them, and the islanders now have a high standard of living by most South Pacific standards. While most food has to be flown from Chile, this isn’t a place where visitors will have to skip their indoor plumbing, electricity, or internet access.

There are, of course, some dissenters who long for independence, but (as we understand it), it’s a fairly small minority of people. 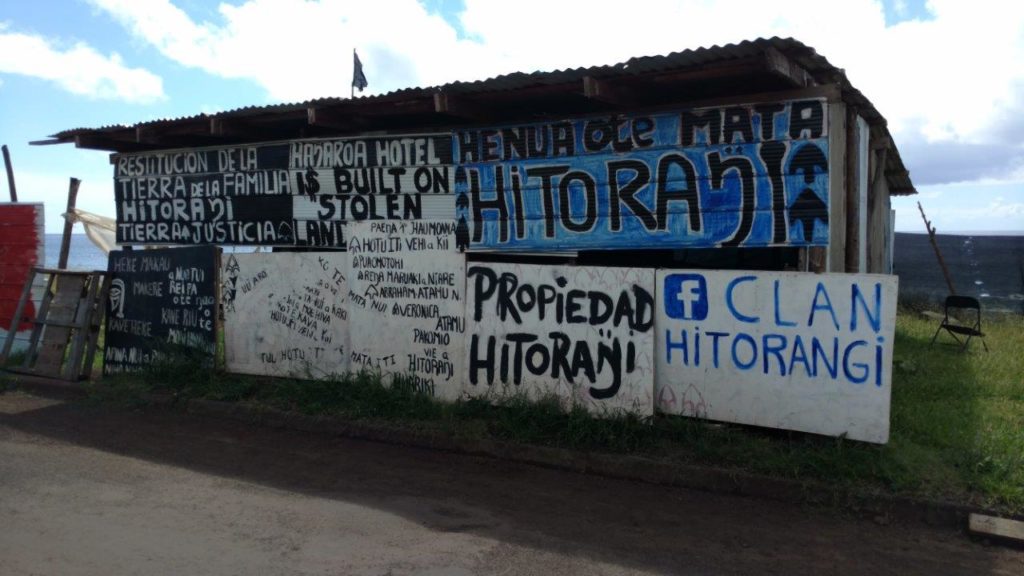 Protest signs unhappy with Chilean control of the island

Before I forget, I need to give a huge shout-out to this book by one James Grant-Peterkin. A British man who has since learned the Rapa Nui language and moved to the island, the author James is now the island’s sole diplomat and wrote an incredible guidebook for those visiting the island. Granted, it’s a small island, but it may be the best guide book we’ve ever used; it really felt like traveling with a personal guide, at a small fraction of the cost. You can read a fun BBC story about James here.

How Does One Get to Easter Island? Can It Be Done Affordably?

There are flights to Easter Island from Santiago, Chile, and only Santiago, Chile, requiring five hours of flying time for each direction. LATAM Airlines, formerly LAN Chile, is the only airline that flies there. (Technically speaking, there is a flight to/from Tahiti once per week, as LATAM operates a flight between Santiago and Tahiti that uses Easter Island as a stopover.) I’m not too fluent in airline politics, but I think that allowing another international airline to fly to Easter Island would require government approval by Chile, and I can’t imagine that they would want to break LATAM’s monopoly for any reason; the airline monopoly to the island is probably here to stay.

It’s becoming a really popular tourist destination, and with the airline monopoly on the island, round-trip flights usually cost a WHOPPING $500-$1000, per person! We read a few travel blogs and guides that suggested arriving in Chile with some flexibility and crossing our fingers for a cheap last-minute flight might be the only way to get the cost down, but it’s really risky if no seats actually open up; if we had it to do over again, we probably wouldn’t take the chance. (Also, while LATAM is a member of the Oneworld airline alliance along with American Airlines, British Airways, and Qantas, never once in all of my searching did I see the airline make any seats available as free frequent flier seats, to be paid for with miles or points. Cash is king, it seems.)

We landed in Santiago on February 1, 2017 and by the next day we were already stalking flight prices on Google Flights. (If you’ve never used Google Flights, I highly recommend it; it shows you a calendar with the price on each and every day, allowing you to find the cheapest one. In more populated areas, it will even suggest nearby airports that may be cheaper than your original choice.) 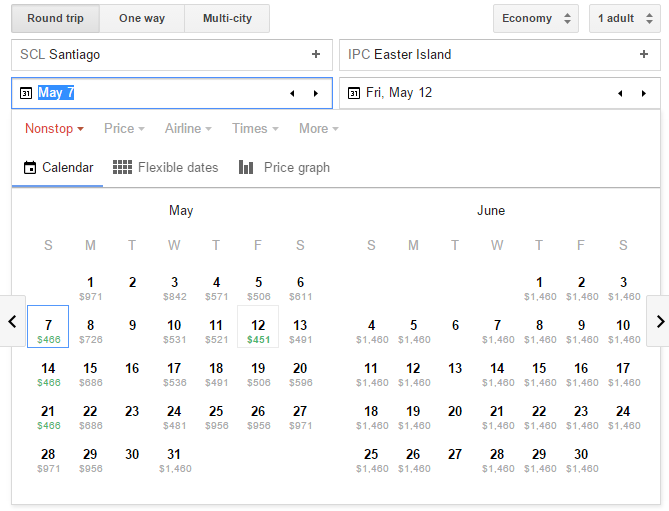 By the afternoon of the next day, we were yelling at each other from opposite ends of our hotel room:

“Craig! Google Flights says there’s a flight to Easter Island in 3 days for less than $300!”

“THAT’S AMAZING! Grab it, Charley, before it disappears!”

“Oh no, it disappears if I change the dial to say we have 2 people. I think there might only be one seat left on the plane!”

An hour later, we had booked our (TWO!) seats and made several discoveries:

Yes, these tickets were still expensive, and we’ve been trying to travel cheaply, but going to Easter Island has been a dream of ours since long before our trip began, and we knew the opportunity might never present itself again. We got ourselves there about as cheaply as anyone could hope for, about $2000 cheaper than retail price, and one of us got to fly the trip in Business Class! (Maybe you can guess who.)

Three days later, we left mainland Chile for the island, excited about our once-in-a-lifetime chance to see Easter Island. 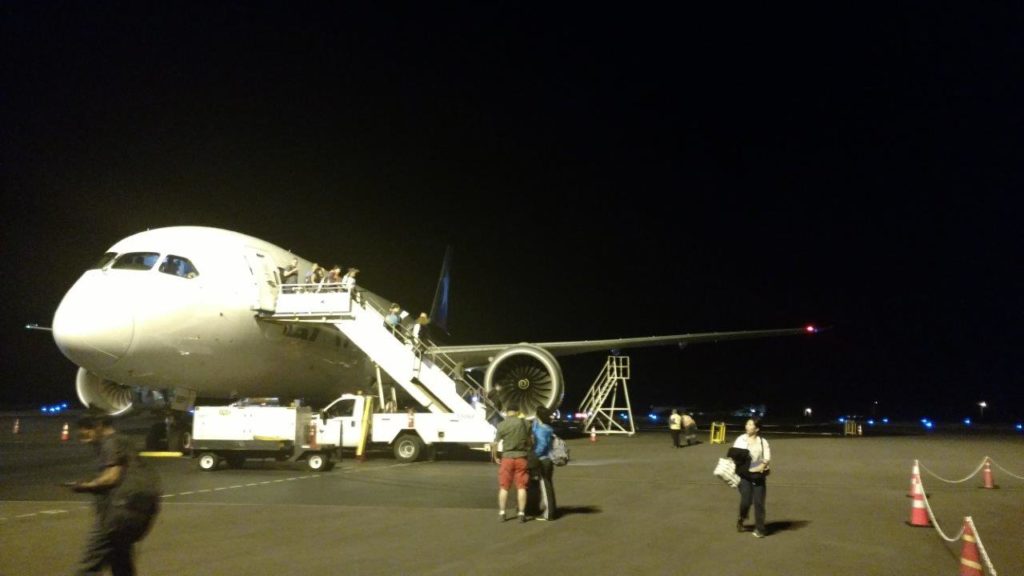 LATAM flies the 787 “Dreamliner” on the route to Easter Island, making for a very comfortable flight

Easter Island is famous for most people as “the island with the big stone heads.” These Moai, as they’re known, were carved by the indigenous people hundreds of years ago and aren’t found anywhere else in the world, even on other remote islands of the South Pacific! European explorers in the 1700’s reported seeing these statues standing upright around the island, but by 1825, a British ship reported seeing no statues left standing. There are many theories you can read about why the statue-toppling took place, but no one knows for sure: the Rapa Nui people had no written language, and so no records exist to tell us.

These days, Moai have been uprighted in homage to the island’s history, and tourists flock to the island from around the world to see them and revel in the mystery of why they were carved in the first place. There were three main steps to create a complete moai statue:

You can see these steps in our various snapshots below. 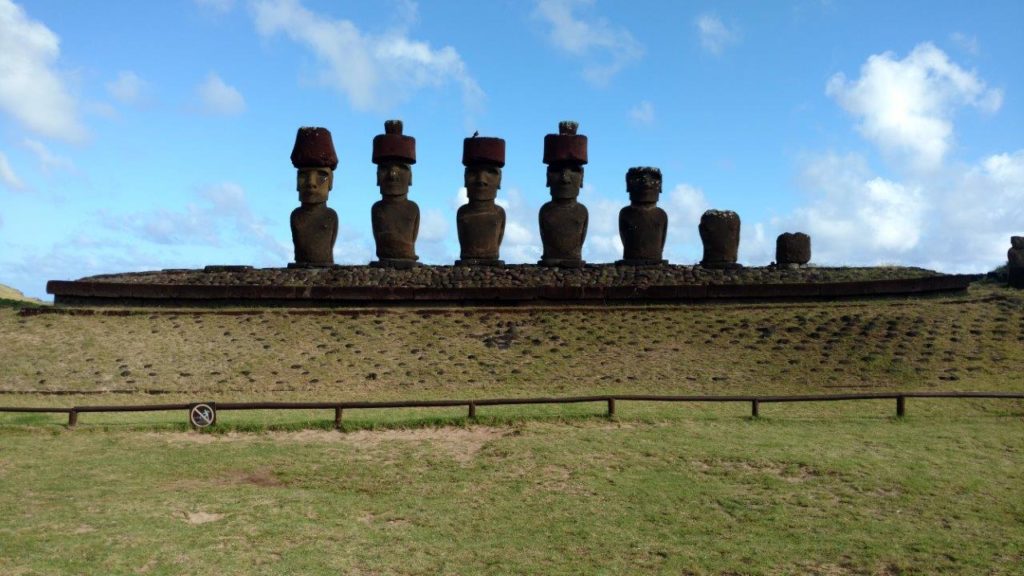 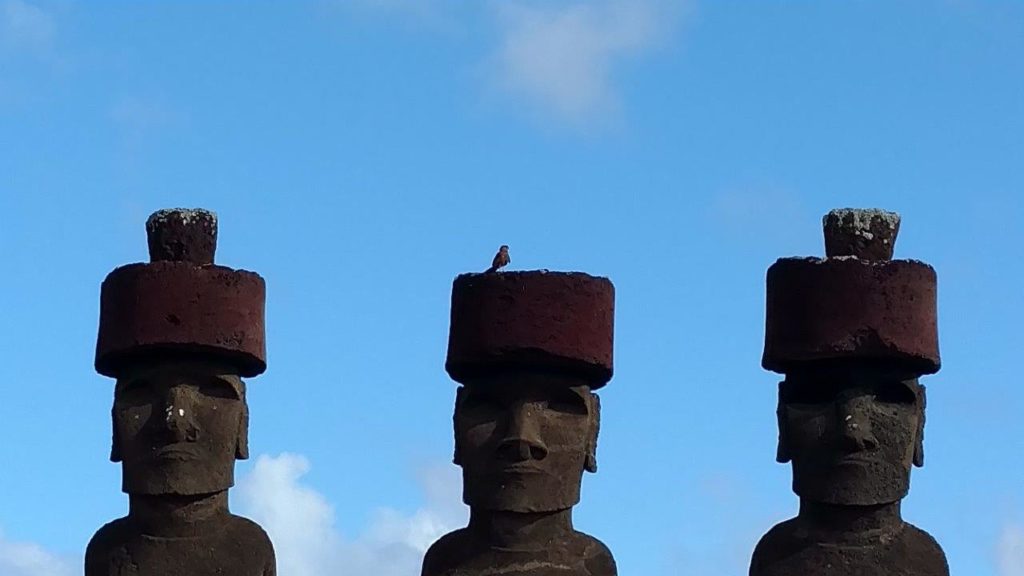 Little bird, making himself at home on the Moai of Anakena 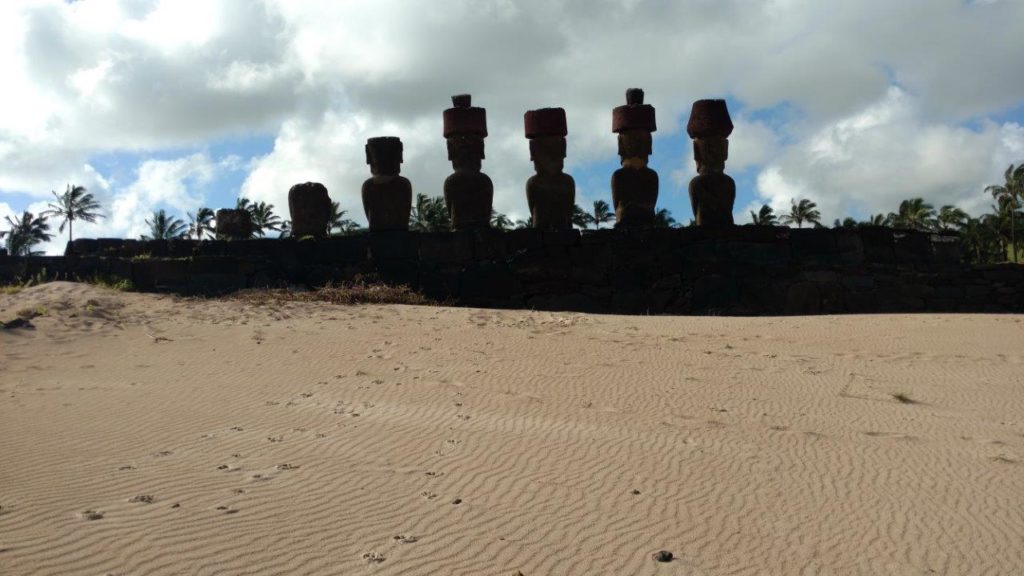 Back of Anakena Moai 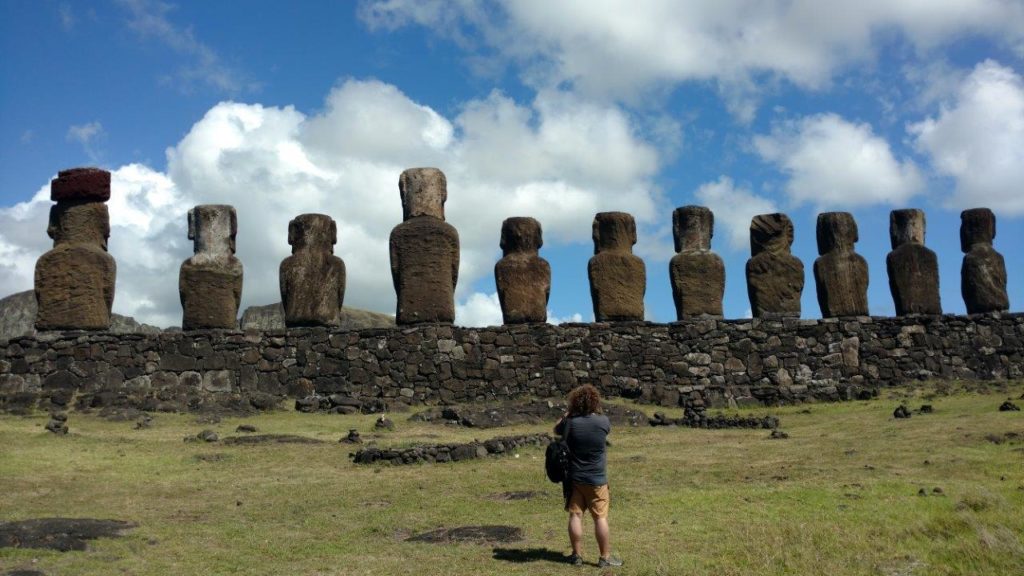 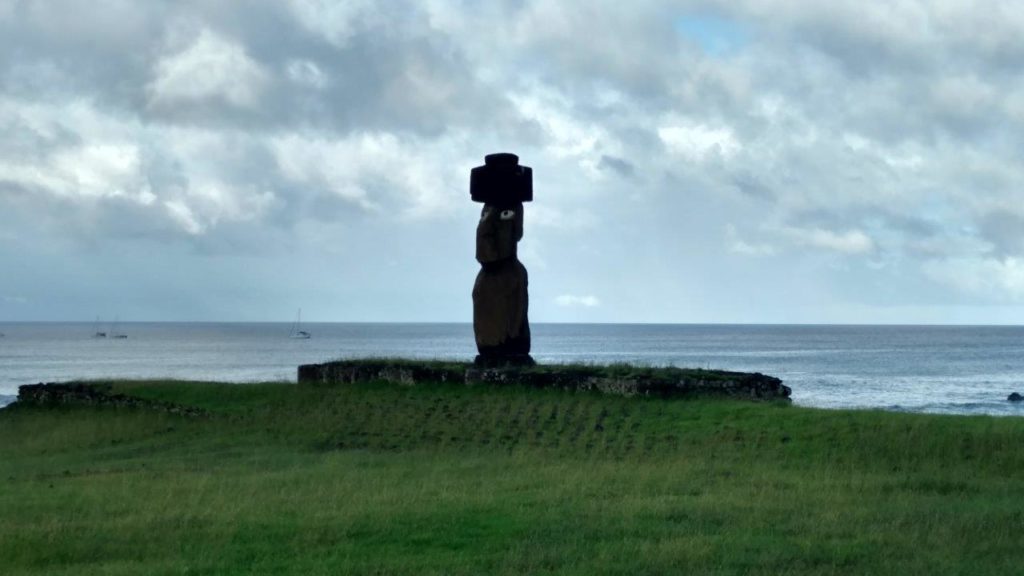 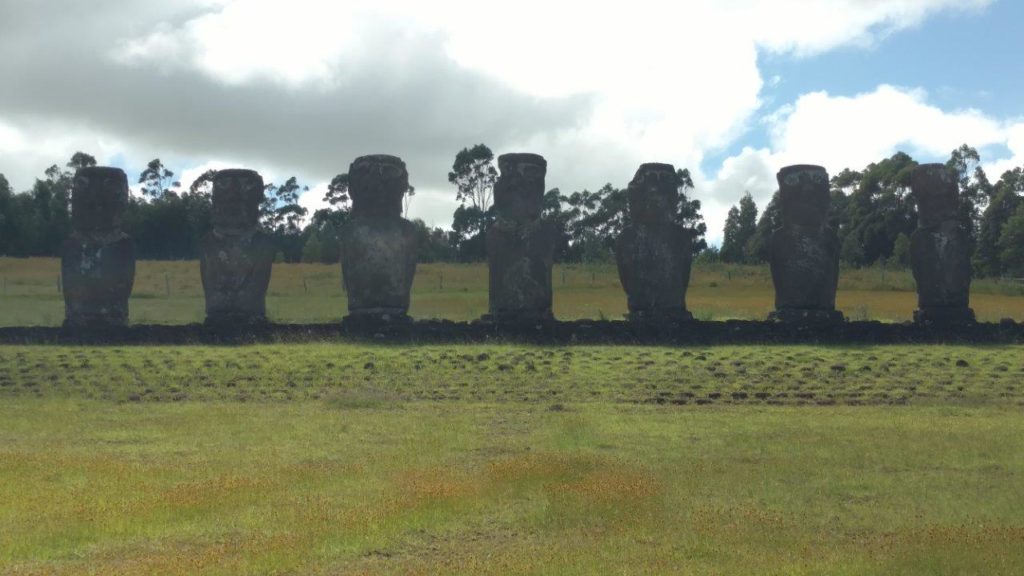 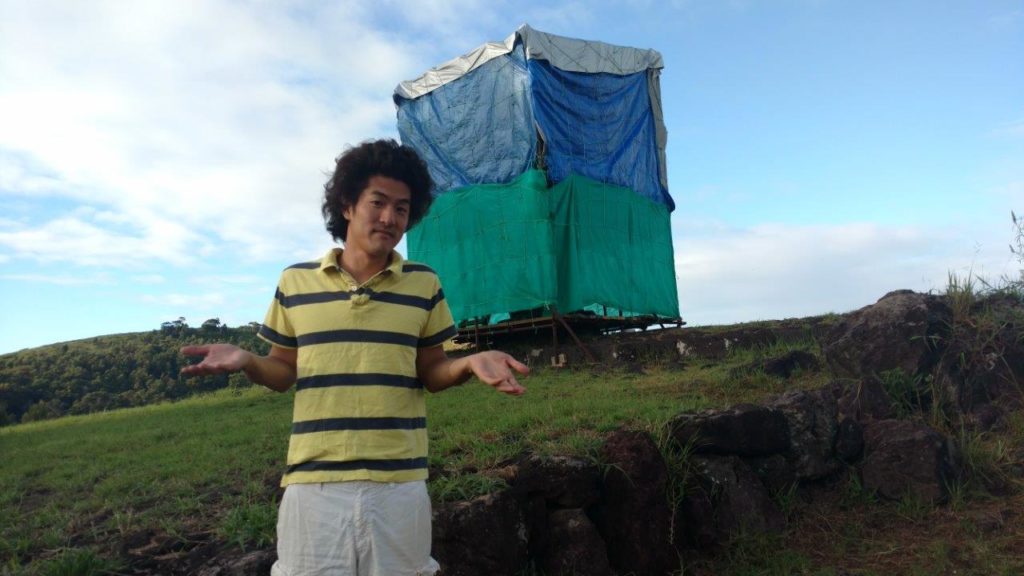 Followed our trusty guidebook to one of the more obscure Moai, only to find it under maintenance 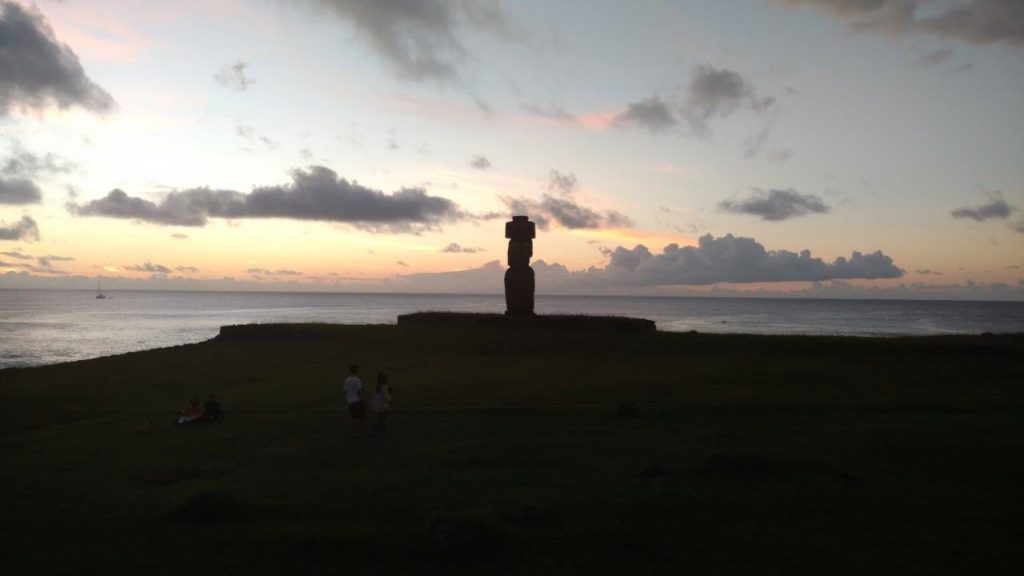 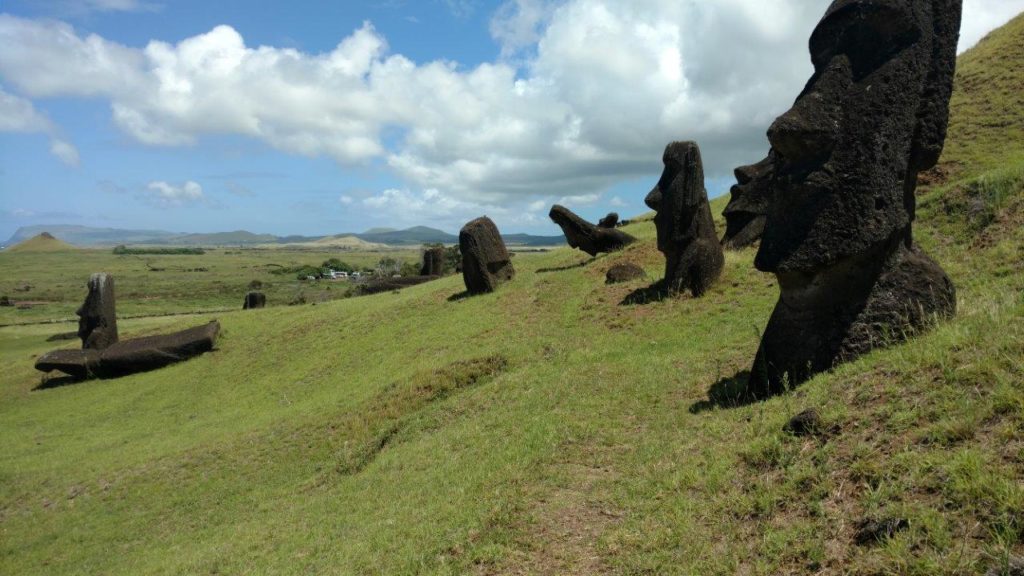 Rano Raraku quarry: Carvings are being prepared for transport 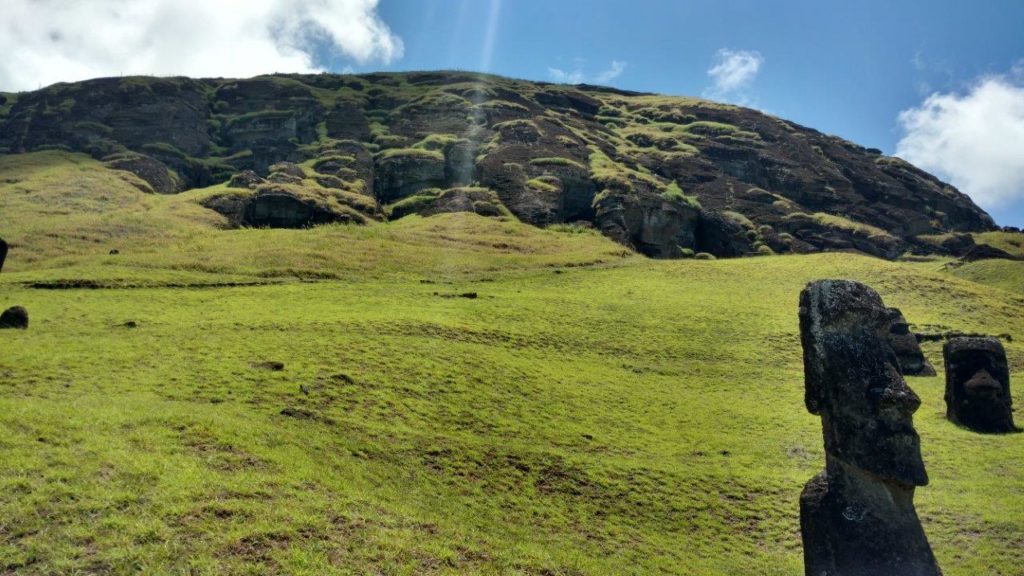 Rano Raraku quarry: look carefully at the stone mountain and you can see the divets where stone was carved out of the mountainside

Orongo volcanic crater – not actually Moai, but oh so pretty 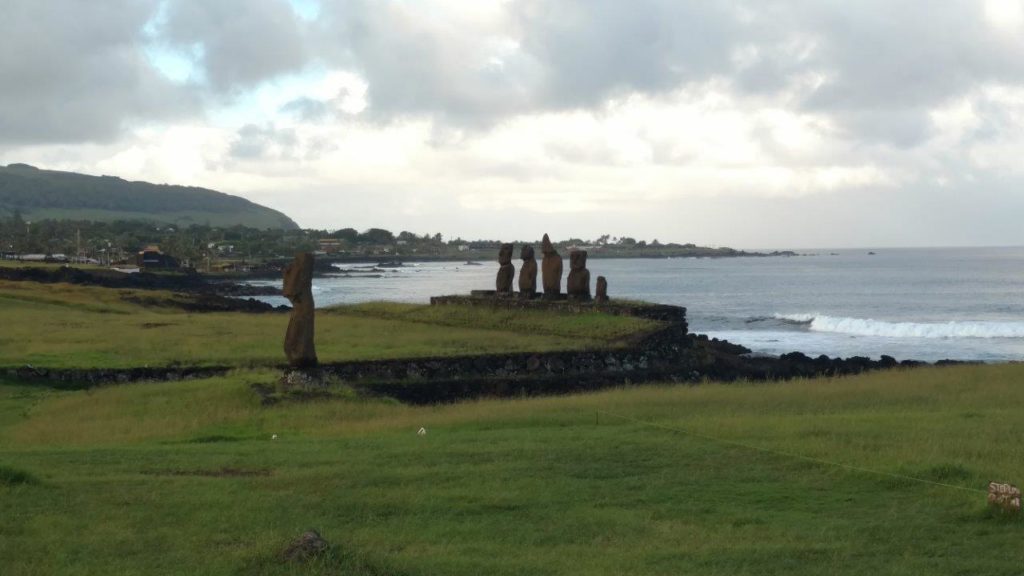 Little did we know until after we had booked our flights, we had timed our arrival to coincide with the annual Tapati festival. The festival is an annual celebration of the indigenous Rapa Nui culture, and for the past few years has become an incredible tourist high season. When we realized this, we were even more excited about the great steal we got on last-minute airfare; another tourist we met mentioned she had booked her flights months in advance and paid over $1,000 per person!

The Tapati festival includes nightly performances with different themes. One night there may be a competition for theatrical shows to tell the history of the Rapa Nui people; another evening there may be a “musical” competition. In addition, daytime includes competitions of athleticism and skill, with competitions such as javelin-throwing, swimming, or even wooden Moai carving. We managed to catch lots of these competitions and events in between our sightseeing. The most notable aspect for foreign spectators might be that many of the athletic contests are in traditional Rapa Nui garb: just loincloths! 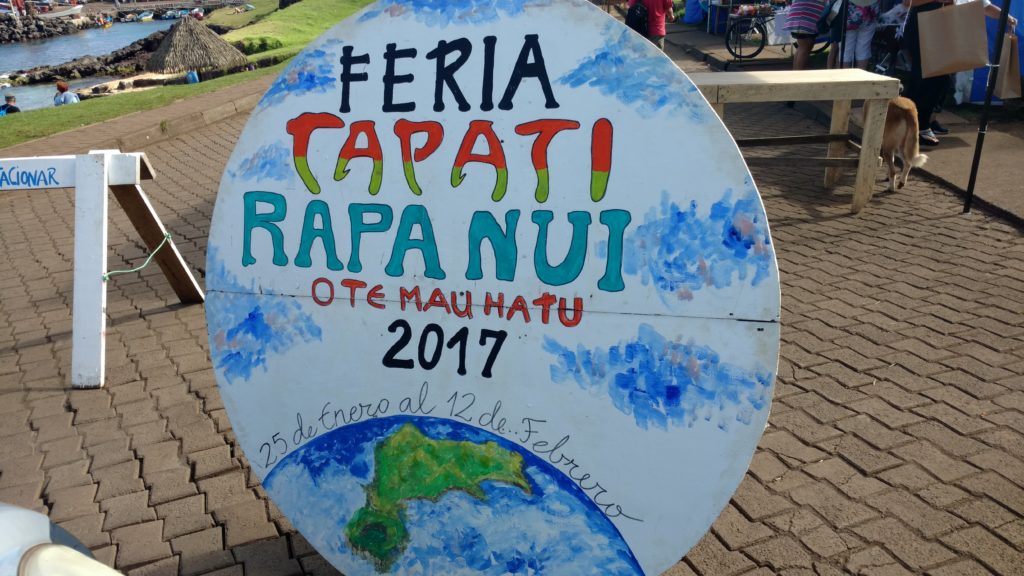 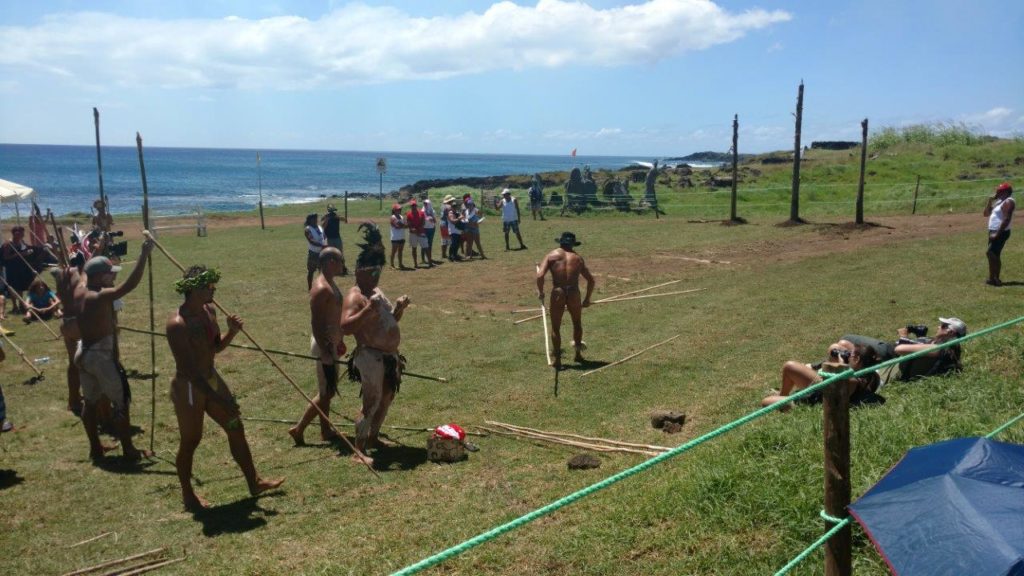 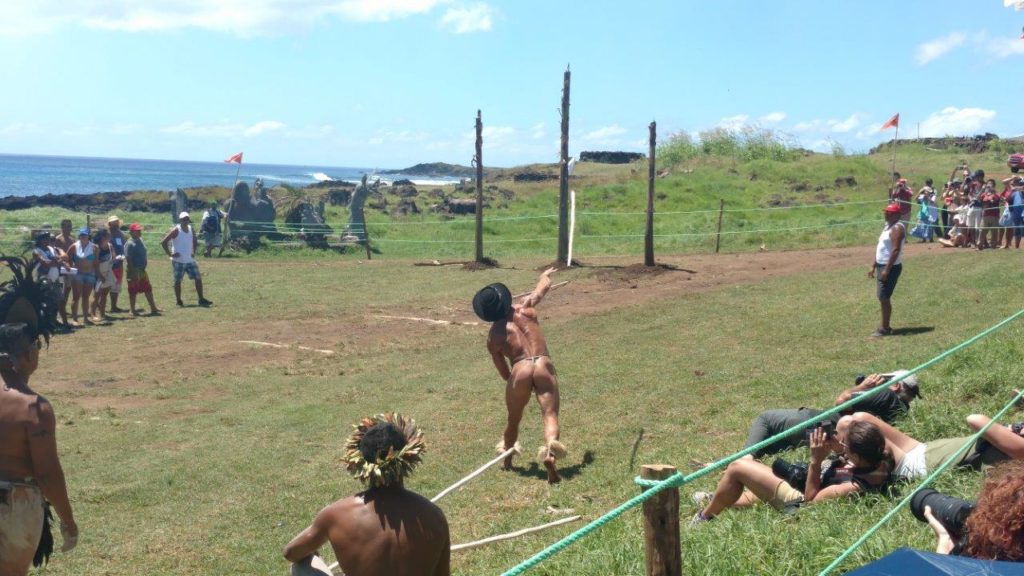 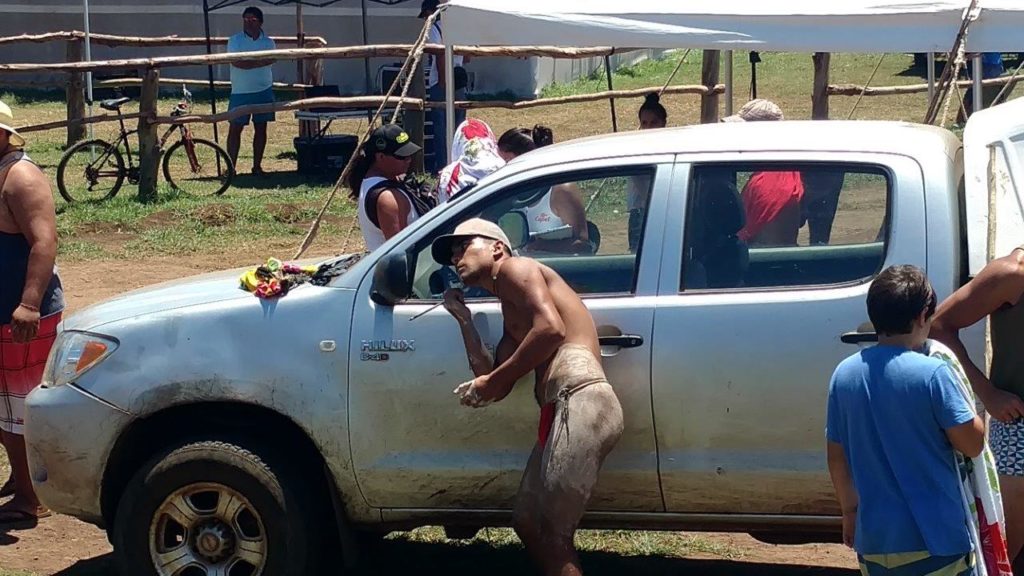 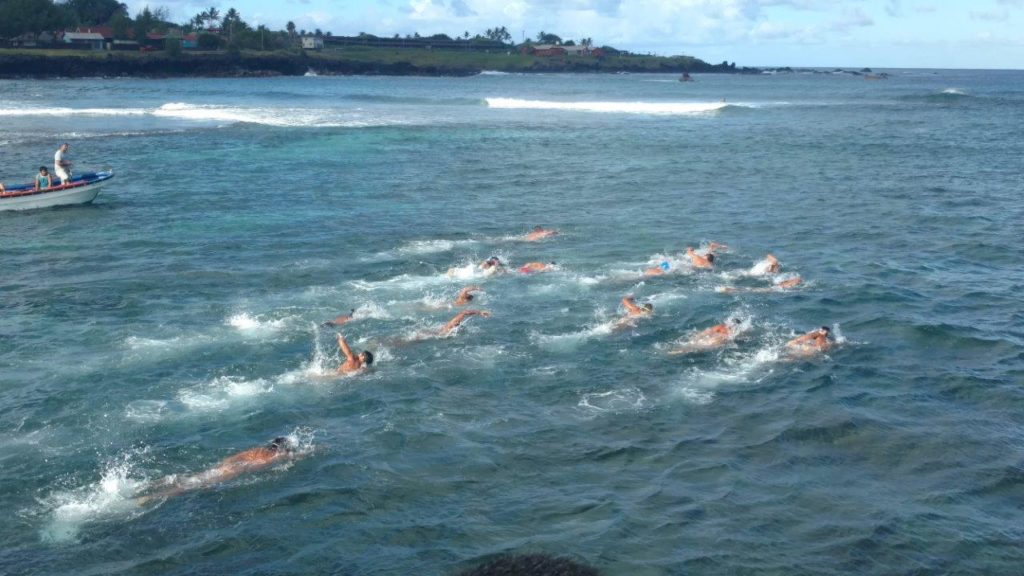 Swimming competition in open ocean – it was so far! 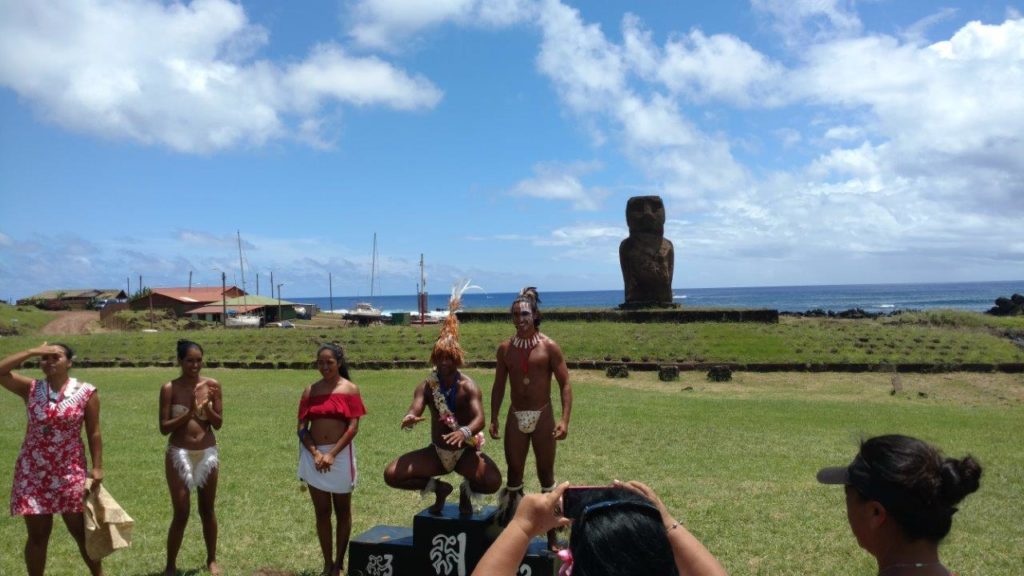 Crowning the winner of the wardrobe contest, in front of one of the traditional Moai 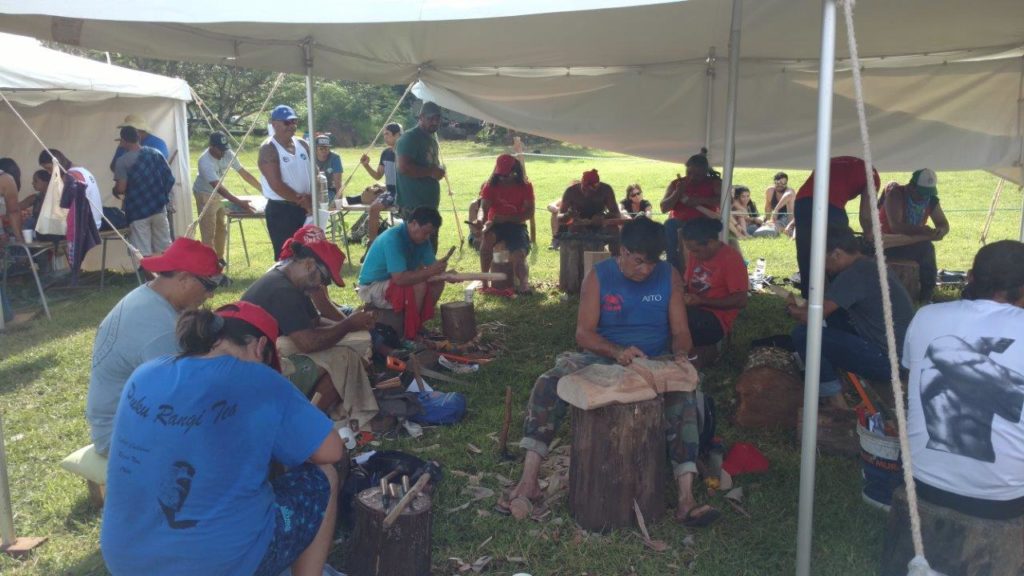 Moai carving contest – in the light blue shirt is Miguel, our host whose apartment we were renting for our four nights on the island

One competitor works to prepare for his javelin throws

The goal was to spear the wooden poles, and very few competitors could do it. I managed to capture this competitor’s second and third successes.